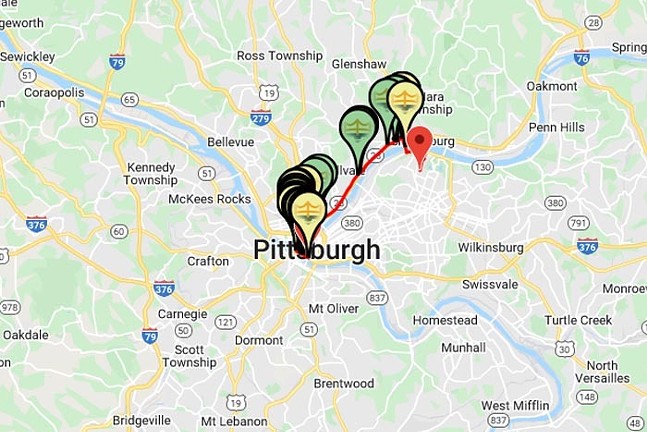 Screenshot
Bad Bridges app
Increased attention has been paid to Pittsburgh’s infrastructure following the collapse of the Fern Hollow Bridge at Frick Park. But given that the city boasts 446 bridges (well, 445 now) it can be difficult for residents to track down data on the ones they cross the most. A new citizen-created app called Bad Bridges was just created to help with this and give some peace of mind to anxious commuters.

This week, software engineer Rainy Sinclair posted the app, which they built on Glitch.com, a free tool they describe as letting users “really easily create web apps that do pretty much anything you want.” They debuted the app on Feb. 22 with a tweet that reads, “Pittsburgh people! Have you recently started wondering how many structurally deficient bridges you regularly cross over? Well, I made a thing that can tell you.”

Sinclair, whose past projects include a program to help them identify mushrooms and a “big interactive LED tree,” says Bad Bridges is their first attempt at making something that “incorporates civic data.”


Pittsburgh people! Have you recently started wondering how many structurally deficient bridges you regularly cross over? Well, I made a thing that can tell you:https://t.co/nbD9JKi67R

Sinclair says they pulled the list of all the bridges in Pennsylvania from PennDOT’s open data website, then filtered it to just the bridges in Allegheny County. Users can then type in their route into the app and pull up how many bridges there are along the way. From there, users can scroll down to a list citing every bridge, the year it was built, its current condition (ranging from Poor to Good), and its last inspection date, as well as the entity that oversees its maintenance.

“I think I’m hoping that it will help personalize some of our infrastructure problems for people,” says Sinclair. “It’s one thing to say, there are over 200 bridges in Allegheny County with a ‘Poor’ rating, but I think that’s hard to fully understand on a personal level. On the other hand, it feels a lot more meaningful to say something like, ‘You regularly cross over three poor quality bridges, and here’s where they are, and this is who is responsible for their maintenance.’”

Sinclair admits that while the system isn’t perfect it “does its best to guess” which bridges users might encounter, but says it “might not be 100% accurate.” This, they say, is mostly due to bridges being so closely bunched together, especially around the Downtown area.

“I do have a tech background, though I don’t really have much website-making experience, so it took some time to put it together,” says Sinclair. “That’s also why it doesn’t look super fancy and is kind of janky.”

Still, the site gives commuters spooked by the recent bridge collapse a useful tool to start with when trying to plan trips and wondering what bridges to avoid.

“For real, though, timing-wise, I think the Fern Hollow Bridge collapse really brought our infrastructure to the forefront of everyone’s mind, myself included,” says Sinclair. They cite how the bridge collapse adds to a number of other disruptive “infrastructure-related disasters” that have plagued Pittsburgh, including the Liberty Bridge Fire, as well as sinkholes, power outages, and other issues.

“All these huge problems are really hard for me to think about and contextualize on an individual level,” says Sinclair. “Like, if everything is breaking, then what specific broken things should I pay attention to? Should I just be generally anxious all the time? So ultimately, I think making the map was a way for me to connect the ‘our bridges are breaking’ problem to my life in a way that my brain could actually process.”