There's a grimy strut to The Fratellis' bustling British rock and chunky anthems, but it wasn't born in a garage. Instead, the Glasgow trio met while spinning kids in teacups in a ragged six-ride fair traversing Scotland. This perhaps explains their limber, boisterous rhythms and the circus-like ebullience that transforms frontman Jon Fratelli into a carnival barker. The members all took bassist Barry Fratelli's surname, and, like the Ramones, suddenly were brothers.

Like carnies, the characters in The Fratellis' 2006 debut, Costello Music, are always on the make or eyeing the door. "I can help her out but I've got somewhere to be, and that's the very thing when you're dealing with me," Jon sings on "Ole Black 'n' Blue Eyes." On the debut single, "Henrietta," the chorus encourages the namesake character to "clean out the bank and bump off your daddy / You can come live with us among the has-beens and the addicts."

This cheeky insouciance is much of The Fratellis' charm, and they come across like the Strokes without the sense of superior breeding and manifest destiny. These three are your scampish outrageous buddies, with shout-along songs that have become soccer staples (the glam-ish "Chelsea Dagger") and iPod commercials (the irresistible garage-pop "Flathead"). The Fratellis are tagged as a "lads' band" because of the songs' subject matter and pub-rock energy, but the coy writing is far sharper than any favored by America's askew-ballcap contingent. It was enough to edge out fellow sensations The Kooks and Lily Allen as last year's breakthrough band, as voted by BBC Radio One listeners.

This spring's return, Here We Stand, sounds old, wiser and not quite as meticulously jaded. Piano and growing maturity are the centerpieces of several songs, including "A Heady Tail," which assails a person for whom "living's much too easy and dying will be some kind of bore." Already in their late 20s, the members sound chastened by Costello Music's victory lap, even donning the cuckold's coat as last year's model on "Shameless," complaining, "it's a shame or a sham, he's half as old as I am / Don't tell me he could look good if he tried."

The reviews weren't as breathless this time -- and abjuring the bad-boy pose probably traded some commercial viability for credibility -- but the complaints seem more backlash than warranted. The songs still possess a 6-year-old's irrepressible energy and they sound distinct without losing The Fratellis' distinctive roguish smirk. 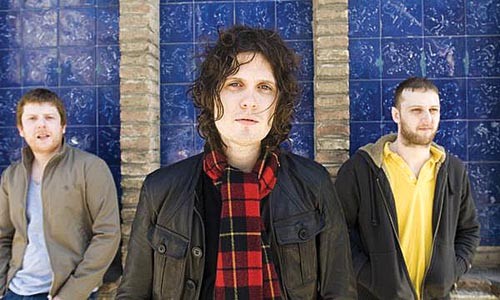