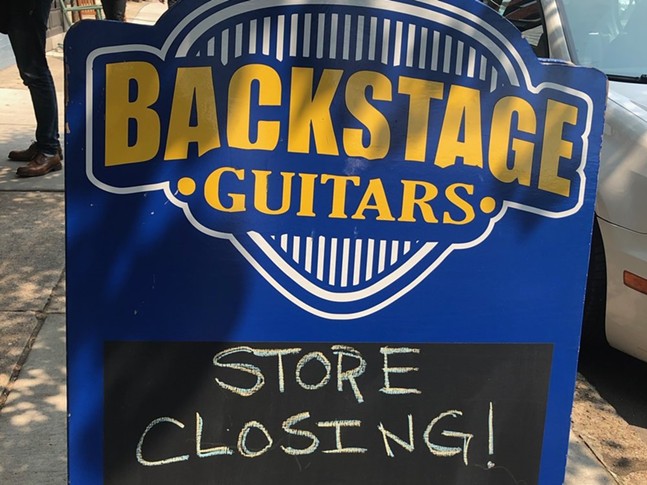 Jason Cook
Sign in front of Backstage Guitars
Backstage Guitars, a hub for guitar sales, repairs, and lessons in Lawrenceville, is undergoing some major changes, including a new location and shift in services.

Owner Jason Cook announced in a blog post on the Backstage Guitars website that the business will relocate in August. He also plans on eliminating the retail aspect of the business, but the studio for guitar lessons and the repair shop will remain, as he believes those are the strongest and most lucrative elements of Backstage Guitars.

The store, which is currently located at 4123 Butler Street, has been opened since 2009, a time Cook remembers as the beginning of a changing culture in Lawrenceville.

“When we opened the store, we were considered ‘new Lawrenceville,’” he says. “Even 10 years ago, people were getting pushed out and people who lived around here were getting disenfranchised and didn’t like that there was this fancy new guitar shop going in. But I think over time, people realized what we were trying to do, which is bring cool, affordable stuff that wasn’t in the other stores in Pittsburgh.”

Despite having a niche market for guitarists in the area, Cook’s business attracted people to Lawrenceville through lessons, with at least 100 students coming in each week. The move to a new location comes at a time when many buildings in the area are being bought out to bring in upscale restaurants and bars.

“If you look on our block and the next block up, there’s an entire row of empty buildings and storefronts that, basically, every business there left because somebody bought the building and wanted more rent or didn’t offer a new lease,” says Cook.

“My situation is a little different,” says Cook. “Somebody who owns some property, he owns a restaurant down here, he actually bought this building. I made that blog post and a lot of people were commenting and saying ‘oh, they raised the rent,’ and technically yeah, but [the new owner] didn’t even give me an option to raise the rent. I don’t think he wants a tenant. I think he wants to either put his own business here or he knows people that want to be here.”

Despite the bitterness of leaving his original location, Cook looks forward to moving to an affordable new location and continuing with instrument repairs and lessons.

“I feel pretty lucky that I’m gonna have a cool spot,” he says. “It still needs a lot of work before its ready, but hopefully by August 1 we can get that going.”

Cook has yet to announce the address of the new location but has stated that the business will remain in Lawrenceville.