Back to the old school with natural wine

“I fell head over heels in love with these types of wine.”

For all its flaws, the global food industry has certainly made progress in cleaning up its act. From fair-trade coffee to grass-fed beef to organic tomatoes, concerned eaters now have more options than ever to craft diets that align with their morals. Alcohol, however, has largely been left out of that conversation. What’s the ethical boozehound to do?

For Dom Fiore, one answer is natural wine. As sommelier at Bar Marco, Fiore pours exclusively natural wine, a small but growing category that offers an alternative to conventional, industrial wine. Unlike other designations, “natural” is not a well-defined or regulated term. Fiore sums up the approach this way: “Take what nature gives you, and don’t do a whole lot to it.”

Fiore considers a wine to be natural if it meets his “big three” criteria. The grapes must be grown without chemicals, and ideally in a polyculture (i.e. planted with other crops). The wine should be fermented with wild, native yeast rather than commercially purchased strains. And most importantly, the wine should undergo minimal manipulation in the cellar. This means little to no added sulfur (a common preservative) and none of the many additives winemakers use to control taste, clarity and stability.

All of this means wine that is kinder to the Earth and closer to what we drank for the vast majority of human existence. But ethics and romance aside, the taste is what sold Fiore on natural wine. “Never in a million years did I think I’d be just as excited, if not more excited, about wine like this than [about] pulling a cork on a $500 bottle of wine,” he says. He cites the way natural wines tap into a world of flavors beyond conventional bottles. A few years ago, Fiore made the risky move of switching Bar Marco’s list to entirely natural wine. “It’s not because I found this niche thing,” he explains. “I fell head over heels in love with these types of wine.”

The hands-off philosophy of natural winemaking means great variation in bottles. A familiar style might taste and look different than you expect: Wild yeast may bring surprising funky notes, and cloudiness is common. But despite (or perhaps because of) these variations, Fiore says customers have embraced Bar Marco’s all-natural approach. And though “non-industrial” often means “expensive,” many natural wines cost the same as a decent bottle of the conventional stuff.

Because “natural” is not a regulated term, it can be difficult to know whether a wine is natural right off the shelf. For an introduction, head to one of the growing number of Pittsburgh bars pouring natural wines. In addition to Bar Marco’s extensive selection, Allegheny Wine Mixer, Smallman Galley and Ace Hotel all include natural offerings on their wine lists.

Fiore is excited about the spread of natural wine, and sees a bright future ahead. As he says, “It’s not a trend. It’s a movement.” 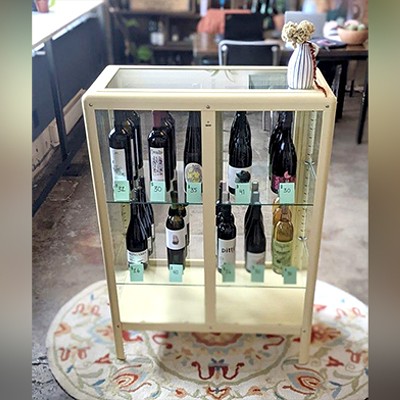 NYC’s Casellula Opens on the North Side