A restaurant named Bacchus, after the legendarily lush Roman god of the grapevine, might be the last thing you'd expect in sleepy, suburban Forest Hills, where a Prohibition-era ban on restaurant sales of alcohol stayed on the books through the turn of the 21st century. Shortly after it was lifted, however, the husband-and-wife team of Crispin and Holly Zuback saw the chance to realize their own vision of Bacchanalia, made safe for the suburbs.

In a former Studebaker showroom on busy Ardmore Boulevard, they have designed a restaurant with two dining rooms, a bar, a cozy lounge area with a fireplace, plus a small café complete with dessert cases and a walk-up custard window. The kitchen backs it up with a menu that includes small plates, sandwiches, pastas and entrees, all of it framed by a love of wine.

Although the name, the décor and the menu all lean Italian, the kitchen offers a broader range than marinara and veal, as Mediterranean staples such as basil and goat cheese stand side by side with curry, chocolate and remoulade. We were excited by the creativity evident in non-Italian dishes such as filet mignon with chocolate wine sauce. This was clearly a kitchen unafraid to take chances, and we were eager to taste the payoff.

That distinctive filet dish was offered as a small plate and served with a fried red jalapeño, evoking Mexican mole. The full-size steak was properly rare and mostly tender, although a short line of gristle disrupted the otherwise buttery texture. The chocolate sauce was bittersweet and rich without hiding the mildly flavored beef, and the pepper, though its heat was somewhat tamed by the light frying, contributed an assertive spiciness that made for a dynamic flavor blend.

Our other starter was from the section of the menu called the Nosh Board, featuring appetizers meant for sharing. The Mediterranean Plate consisted of hummus and roasted red pepper dip along with kalamata olives, stuffed grape leaves and seed-studded flatbread crackers. Crisps made in house would have been a nice alternative; the grape leaves were pedestrian. But both dips were well above average, with an extra-lemony brightness to the hummus and a rich, creamy, summer-sweet taste to the pepper dip that went far beyond the sometimes one-note quality of roasted red bell peppers.

As our first plates were cleared, we were feeling satisfied and looking forward to our delicious-sounding entrees, but the kitchen's sure hand with appetizers failed to extend to the more substantial dishes on the menu. To be sure, none of them counted as failures, but none was wholly successful, either.

Jason's scallop and shrimp risotto, featuring three gargantuan scallops, was on a bed of asiago risotto that got the exacting texture of this Italian delicacy completely wrong. Instead of just-firm rice in a creamy sauce, the grains were slightly gummy in a thick, cheesy sauce.

An autumnal dish of lavender- and sage-rubbed pork tenderloin with cherry sauce delivered on its promise of intensely flavored pork and a rich, sour-sweet sauce. The side of sautéed baby carrots was cooked enough to be soft on the outside and tender within, rather than half-raw and crisp. But the garlic mashed potatoes were dry, chunky and harshly garlicky.

Angelique's goat-cheese ravioli featured a sauce so sweet -- it reminded Jason of lemon curd -- that it clashed with the creamy tang of the goat cheese, while the asparagus tips in the menu description turned out to be mostly stringy, woody stems. Still, an accompanying Caesar salad was exceptional, with crisp lettuce, freshly shaved parmesan, plenty of crunchy croutons, a light -- not goopy -- dressing, and, best of all, two fresh, savory anchovies on top.

Bacchus has many of the right ingredients for success: a pleasantly elegant yet relaxed atmosphere, professional yet friendly service and a mouth-wateringly enticing menu. The kitchen delivered with its starters, but ultimately its reach exceeded its grasp. 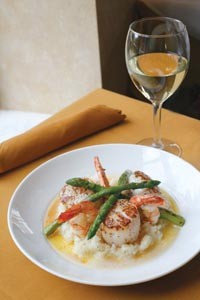