Filmmaker Thomas Balmes contrasts the lives of privileged babies with those in the developing world. 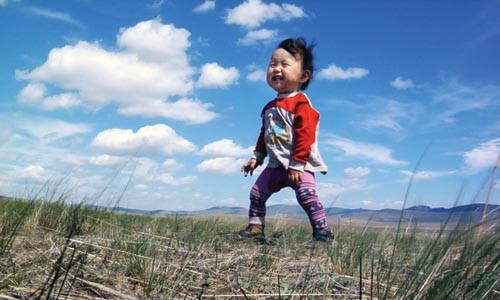 It once took me three days to figure out how to open the cabinet beneath the kitchen sink of some friends who had a baby. I tugged and tugged but the damned thing just wouldn't open. Finally, next to a lonely plant on the window sill, I noticed the magnet. And voila!

In the industrial world -- and especially in America -- we look after our children almost as well as we look after our pets. But that's not true of the isolated world, not because parents don't love their children, but because, when it comes to children, love isn't enough.

In Babies, the French documentarian Thomas Balmes spends a year in the life of four neonates: Hattie of San Francisco, Mari of Tokyo, Bayar of Mongolia, and Ponijao of Namibia. The first two live more vertical lives, while for the other two, life is more horizontal on the wide-open landscapes of their underdeveloped countries. Balmes often films with a telephoto lens to capture intimacy without intrusion, and his film looks more like a drama (albeit one without dialogue), with perfectly framed images and expressive lighting. We're aware of the filmmaker here, but not the camera.

In one way, it's easy to tell what Balmes is up to. He wants Westerners to contemplate their privilege, so we see moments of Hattie being stimulated by toys and technology -- and then we see Ponijao crawling naked on the African ground, picking at rocks as the flies swarm around her. Balmes uses such juxtapositions often. It's effective, if apparent, although the fact that all four babies survive and thrive invites complacency in the end.

I just wonder how the San Francisco parents will feel after a scene in which they and their friends sing a safe, cheerful, hypocritical chorus of "the earth is our mother, she will take care of us" -- moments after Bayar gets stepped on by a calf, and after countless images of Ponijao, whose mother bathes the child with her tongue.

Just as interesting, although surely less compelling, is watching the babies develop intellectually and emotionally. The American and Japanese babies get lots of artificial stimulation. Ponijao has only the natural world and his matriarchal village life (there are no men in the Namibia scenes). For Bayar, in Mongolia, it's somewhere in between: motorcycles and electricity, but also a rooster on the bed, flapping his wings as Bayar lies helpless beneath the flutter.

Francois Truffaut's delightful movie Small Change, about the resilience of children, has a harrowing scene where an unattended baby falls from a window and lands on the grass a few stories down. He's fine after the fall, and that's Truffaut's point: Children can survive most anything. Well, yes, I suppose they can. The question is: Why should they have to?