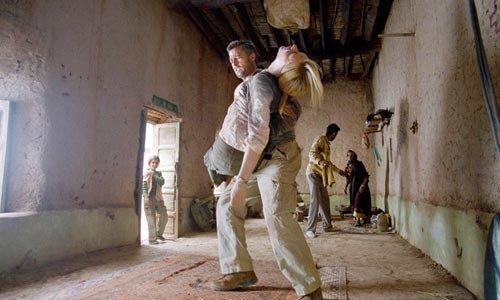 In Morocco, a poor goat farmer buys a rifle for his two sons, one of them not yet a teen-ager, so they can shoot at marauding jackals as they tend the bleating herd. But they're just kids, and of course, they have to prove themselves. Who's the better shot? The older boy can't hit the broad side of a tourist bus buzzing along a mountain road. The younger boy does.

In San Diego, the Latina caretaker of two Anglo children needs to get to her son's wedding in Mexico. But her employers (Brad Pitt, Cate Blanchett) are delayed on their return from an international vacation. So she asks her nephew (Gael García Bernal) to drive her and the kids to the wedding. On the way home, just before dawn the next morning, a border crossing goes terribly wrong.

In Japan, a group of deaf teen-age girls playfully prowls the video arcades and dance clubs. They giggle and flirt with boys, who are interested until they learn the girls are deaf. So one of the girls -- who lost her mother recently to suicide, and who's now determined to lose her virginity -- removes her panties and flashes the punk who walked away and laughed.

The American woman who gets shot on the Moroccan bus is the mother of the kids who go to the Mexican wedding. The Japanese father of the deaf girl gave the rifle to the Moroccan father during a recent hunting trip there.

Coincidence? Not in a world as small as ours. For this is the work of Alejandro Gonzáles Iñárritu, the Mexican director who made Amores Perros and 21 Grams, and Guillermo Arriaga, his screenwriting amigo. Their earlier movies dodged in and out of disparate stories that finally interwove, and this one does the same, only now on an international scale. No planet is apparently too big for them not to find coincidence in it. Will their next movie tell a compelling tale of Americans, Mongolians, Jovians and Romulans?

To be fair, Babel is about as good as an expensive, globe-trotting, Brad Pitt melodrama can get. It's rarely dull for long, and every 15 minutes or so, Iñárritu comes up with a virtuoso sequence or a money shot. His storytelling isn't as choppy and hectic here as it has been in the past -- 21 Grams was especially convoluted -- and his locales are perfect for the armchair traveler. This is probably as close as you'll want to get to the Moroccan mountains or a small-town Mexican wedding.

Any one of the trio of stories in Babel would make a decent movie on its own, although that would require Iñárritu and Arriaga to sustain characters and ideas. Together they give you your money's worth of entertainment at any exchange rate, with tiny little happy endings for the people we care about most (the wealthy capitalists), and continued abject misery for their Third World co-stars.

Beginning with its title, Babel is a rather pretentious little movie. There's really no misunderstanding here of Biblical proportions, and no division based on language or culture. In fact, the filmmakers try terribly hard to find what we have in common. The last 30 minutes of Babel demonstrate the ties that bind when a character in each location has a big teary emotional breakdown. Babel teaches us that parents everywhere love their kids, but they still make big mistakes, and guess who suffers when they do? I guess it takes a village after all. This movie promotes better parenting like The Exorcist promotes religion: If all of this actually happened to you, then of course you'd start going to church. In English, Spanish, Japanese, Japanese Sign Language, Arabic, Berber and French. With subtitles.