(Away From) Home With: Ben Barson 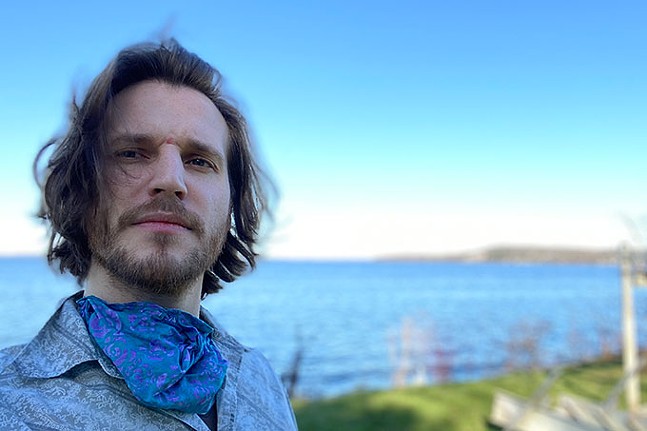 Photo: Ben Barson
Ben Barson
Everybody is dealing with COVID-19 quarantines and restrictions in different ways. While there's no single right way to cope — social distancing and staying TF home aside — connecting with friends, family, and neighbors is a good place to start. You can contact your loved ones on your own, but you might also be curious how your favorite strangers in Pittsburgh are coping, so Pittsburgh City Paper is reaching out once a day to artists, activists, workers, and makers to see how they're doing.

Today, it's Ben Barson — Pittsburgh artist, activist, educator, and co-founder of Afro Yaqui Music Collective — who has been in Madison, Wis., since January. CP checked in to see what life is like to be quarantined away from home.


How long have you been in Madison? What brought you there?
We have been living in Madison since January 20th. Gizelxanath, my partner and wife, and I are artists in residence at the University of Wisconsin-Madison. We were invited here by the UW Division of the Arts, and it’s been organized by choreographer Peggy Myo-Young Choy, who collaborated with us on our 2018 jazz opera Mirror Butterfly: The Migrant Liberation Movement Suite, which we developed through the CSA program at the New Hazlett Theater and had some limited touring afterward.

We are developing a new work with our students in our class, "Artivism: Intercultural Solidarity & Decolonizing Performance" and old and new Afro Yaqui Collaborators Mama C, Nejma Nefertiti, Adam Cooper-Téran, Lacouir Yancey, Rodrigo Carapia, and Mexican-Yaqui activist Mario Luna and cultural defender Anahí Ochoa. It’s a transnational multimedia piece called "Contested Homes" about breaking down borders, building solidarity, and fighting the extractive and life-threatening industries that are driving climate change and, yes, have made the disaster of COVID-19 worse. It's going to premiere online on June 30th at 8:30 p.m. (EST) on our Facebook and other social media.

Our students don’t really feel like students, they’re collaborators. They’re insanely talented and committed. The composers Nick Berkhourt, Henry Ptacek, and Ryan Smolik in the class are totally formed artists, and two others, Maggie Cousin and Lily Finnegan, are already making waves in the local press with their mix of jazz, free, and hip-hop influences. Poet Jackson Neal, Houston's Youth Poet Laureate, and rapper Mauricio Garcia aka MG Rico bring clarity and pathos with their denunciation of white supremacy, nationalist border controls, and patriarchal capitalism in their verses and rhymes. Artists Kim Inthavong (her work is shown below) is generating some amazing content. Singer Qiandai Wang's lyrics and voice is stunning. And we still have a dance component, led by Peggy, with Erik Franze and Jack Schaffer. Pianist and professor Johannes Wallmann's jazz students are recording the music from their home studios and we'll animate a video to it.

One thing that is really important to us is that we find new ways to create and disseminate art even though we are in lockdown. Politics, power, and oppression don't stop in a crisis, if anything, their contours and intersections are revealed in truly stark and brutal ways. Racial and class inequities in COVID-19 transmission and fatalities reveal how Black and Brown death have always been built into the system. We need to call these dynamics out, keep raising the consciousness and organizing potentialities through art to influence the conditions for a revolutionary transformation.

When it became clear you couldn’t come back to Pittsburgh for the time being, what ran through your mind?
We had to stay focused: This is a global pandemic. So we are constantly trying to balance the "bigger picture" of the fact that there is a global poor, there are hundreds of millions of people globally who don't have the ability to wash their hands every day, that there are billions of working people with no savings who need to work to survive — including us — and we are also processing the passing of family members and the sickness of others. Madison has been so, so kind to us. From activists to artists to people at the university, we've been supported by a spirit of mutual aid and solidarity that have blessed us in our darkest hours.

So, it's complicated. Would we rather be in Pittsburgh right now? Yes. We would be able to prepare our garden, prepare the land, take food to some of our elderly and disabled neighbors, say hi through the windows to folks. We know the people on our block pretty well and have been intentional about building community there. Being in Madison was an incredible experience when it did not matter so much what part of town we lived in since we were out so much. We live in an isolated part of town, right next to Lake Mendota, and we do not know our neighbors and we have no way of getting to know them now with the lockdown. We thank the lake and the Ho-Chunk nation who have shaped the ecological history of this region so much. For us, it's about developing an ongoing psychological practice where we balance the bigger picture of a world-historic event, with implications for our entire society, our way of life, the class structure in this world, and trying to keep an even head as much as we can.

What’s a food/dish/restaurant in Madison that’s brought you comfort while you’re there?
We are cooking all of our meals in-home, but back in February I loved going to this restaurant called "Little Tibet." We've also loved hanging at Café Coda, which is a truly incredible space for improvised and creative music including jazz. In fact, Hanah John Taylor and Jan Lin were gracious enough to allow us to host a fundraiser for Yaqui activist Mario Luna Romero there on March 4th, literally a week before the extent of the COVID-19 outbreak became so apparent and deadly.

What’s your day-to-day routine like now?
I like taking Qigong classes with Peggy in the afternoon. In the morning, I might walk by Lake Mendota, which is epic, breathtaking, and serene. I had been practicing and writing music, but now outside of teaching the class and cooking/cleaning, I am working full-time on a book I am writing about the revolutionary and what I call the "alternative modernities" that produced and are reflected in jazz. I've been studying the radical politics and practice of solidarity and collective democracy in the context of the sugar belt, which I define as Haiti, Louisiana, Cuba, and Puerto Rico. The Haitian Revolution especially put antislavery at the center of all further revolutions — remember, the American Revolution did not have an antislavery component, even though people of African descent did contribute in heroic ways. In 1810, after the Haitian Revolution, 9,000 folks from Haiti migrated to New Orleans, almost doubling the population. These people brought forms of politics and resistance and were instrumental in organizing the 1811 German Coast uprising, the largest slave revolt in American history. So this history mattered, it mattered a lot. I want to trace the practices of this rural proletariat that developed a kind of communalistic alternative to the racist, exploitative ethos that drove American capitalism from slavery and which we still feel in the present. And this is what made the music we call jazz so globally powerful; it precipitated an alternative to the kind of social Darwinist ideology and hyper-individualist culture as capitalism really began to take off in the transition 20th century.

What piece of art/film/comic/book/TV/music is bringing you comfort/inspiration at this time?
Have you seen Club de Cuervos? It's about this dysfunctional brother and sister in a fictional small town in Mexico who try to take over their dad's soccer franchise. It's hilarious. It's heartbreaking. It's perfect to escape to right now. I'm also really digging Buffalo Rose's new mash-up! I miss those folks ...

What’s an object that you have with you that has particular significance to you these days?
I've been working on developing my technique on a contra-alto clarinet, which is a beautiful instrument. I'm primarily a baritone saxophonist but this instrument allows me to hear and listen in new ways. It has a totally different airflow and embouchure (the shape of your mouth muscles needed to play a wind instrument).

How are your creativity levels doing these days?
Working on the project for Artivism has been really energizing. Working on my book is super fun. Practicing saxophone and clarinet and piano have been great. Right now I'm working on some new music too, for a project about Arturo Schomburg I'm working on with Magdalena Gomez called Erased, and I'm working with historian Jason Chang and UConn's Asian and Asian American Studies Institute on developing a new multimedia work about the Robert Browne Coolie Mutiny. And we are currently mixing a new album. So there's a lot going on! Creativity is a weird thing. It doesn't like to be forced. Your most natural is your best. But sometimes you do have to produce. So it doesn't really listen to your schedule, but then at the end of the day, you have to get things done.

What are you most excited to do when you get home?
We are excited to get our hands dirty, in the land! Our backyard is also called the Dazzling Swamp, named after the Dismal Swamp of the Maroons and also a shoutout to the prosodists Robert Kocik and Daia Fain. We hope to have as much food grown there as possible to both heal the land and ourselves.

What’s an organization or charity that you’d recommend supporting at this time?
A lot of folks are pointing out that in many ways this crisis is the dress rehearsal for systems breakdowns that will happen due to climate change or climate catastrophe. We can already see in the way the largest corporations in the country, such as Amazon, are firing workers for voicing concerns over their health; over the size of the super-rich's stimulus check; in Trump's recent border closure. So I think now more than ever food sovereignty in oppressed communities is the most important thing we can be supporting and working towards. To be able to grow our own food and build our own systems of exchange, where communal survival and thrival are part of an anti-capitalist transition where we can return to Mother Earth, is absolutely crucial.

To that end, if you are of means, please support The Black Urban Gardeners and Farmers of Pittsburgh Co-op (BUGFPC). BUGFPC was created out of the "need to unite Black urban agriculturalists in the Pittsburgh area for support and to dismantle the systemic racism that infiltrates our communities and further impoverish already oppressed people." They're still out there doing the work, and practicing social distancing when they do so, so you can also follow their Facebook for updates.

Please urge the City of Pittsburgh for its support in the acquisition, ownership, and maintenance of local urban gardens and farms. Empower organizations currently working in food apartheid areas for food sovereignty. COVID-19 has left many families socially and economically deprived, in need of food and we need to improve equality for the Black community of Pittsburgh even in urban agriculture. Right now the need for food security is critical so city gardens should open up immediately to support residents and their urgent need for food.  #OpenUpAllCityGardensNow

At Home With: Ashley Olinger

More »
More At Home With ... »
All Arts+Entertainment »
Comments (0)
Comments are closed.