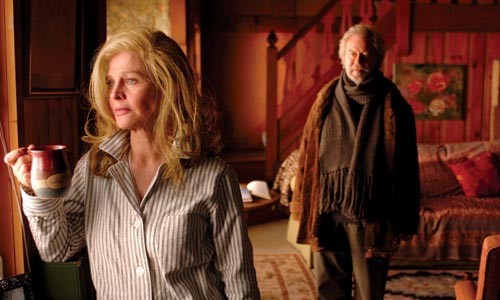 Slipping away: Julie Christie and Gordon Pinsent
Canadian actress Sarah Polley is a thoughtful, quietly intense actress (The Sweet Hereafter, My Life Without Me), so perhaps it's no surprise that the 28-year-old's directorial debut, Away From Her, is a stunner that confidently exhibits those same traits.

The narrative, which Polley adapted from Alice Munro's short story "The Bear Came Over the Mountain," is deceptively simple. Fiona (Julie Christie) and Grant (Gordon Pinsent), a childless couple married for decades, finds their golden-years idyll interrupted by the onset of Fiona's Alzheimer's disease. There's nothing for it: Fiona willingly enters Meadowlake, a relatively pleasant care home, and Grant struggles to preserve their relationship.

Polley drew the film's title from Grant's courtship affirmation that he would never want to be "away from her. She had the spark of life." But the lights are going out in Fiona's head, albeit selectively. She develops an intense attraction to another resident. She can't remember that Grant is her husband, but does recall that her husband betrayed her decades ago. The disease is like a shovel in her mind, turning over the memories in a disordered state.

Christie is a perfect casting choice for the intelligent, vibrant Fiona. We remember Christie's youthful beauty and vitality, how she defined a generation of modern women from the shiny mod '60s through the shaggy, moodier 1970s. Yet the actress hasn't worked much lately. So while her appearance here feels so familiar -- she's someone we've known for years -- now that we see her again, we are shocked to find her failing.

Beyond tapping our external relationship to her screen image, Christie does fine work here, as do all the actors. The actress' much-sighed-over face has always held tiny, perfectly executed gestures -- the bored eyes, the insouciant tilt of the head, those delicately pursed lips. Here, Christie seamlessly shifts through Fiona's deterioration, from pleasure and recognition to fear, blankness and even the sweet release of slipping away. Her assured Fiona is so there, yet heartbreakingly absent.

Polley directs cleanly, borrowing Munro's uncluttered style, and expands the straightforward story with little diversions and insights tucked away for our perusal, such as Meadowlake's robotically upbeat administrator and the seemingly sympathetic nurse Kirsty's casual but piercing dissection of Grant. Nor does Polley overdo the film's visual metaphors: the cozy marital home encroached upon by dead winterscape, the parallel tracks of the couple's skis; and the various road journeys.

Away From Her is no disease-of-the-week hanky-buster; it's finely wrought and poetic, yet rooted and sturdy, turning over its themes of memory, devotion, guilt and sacrifice with a refreshing lack of easy sentimentality. Alzheimer's is the obvious and unwelcome player, but Away is ultimately a portrait of a marriage simultaneously breaking and re-forging, that is surely as affirming as it is devastating.