“She understood the cultural significance of it.” 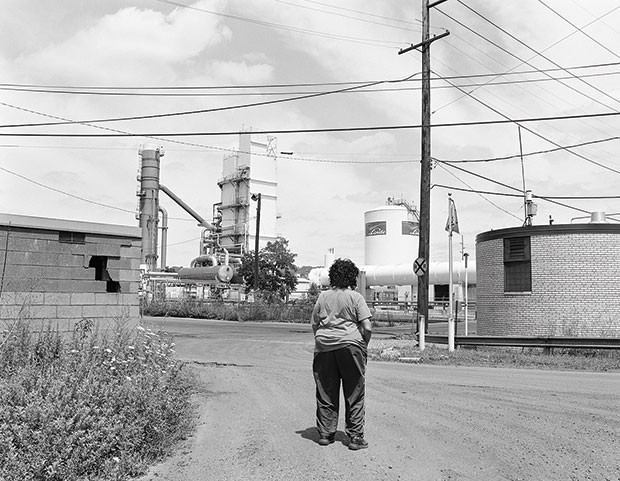 In 1977, while studying at the University of Pittsburgh, Sandra Gould Ford took the first of a series of clerical jobs at J&L Steel. That was five years before LaToya Ruby Frazier was born. But upon meeting, in 2015, the two women connected immediately: They were both African-American artists from Pittsburgh committed to honoring the often-forgotten experience of the working class.

The exhibit On the Making of Steel Genesis: Sandra Gould Ford, a collaboration on display at the August Wilson Center, offers a strikingly layered narrative: Acclaimed photographer Frazier tells the story of Gould, and how she told the story of Big Steel and its demise here.

Frazier is a Braddock native and MacArthur “genius-grant” winner who now splits time between Pittsburgh, New York and Chicago. Working with the Silver Eye Center for Photography (and a grant from the Pittsburgh Foundation), she spent this past August in Ford’s Homewood home and studio, poring over Ford’s remarkable (and previously unexhibited) archive of photographs she took and documents she saved at J&L’s South Side and Hazelwood plants. Ford worked for J&L until the plants were shuttered, in 1985. “They were throwing these documents away,” says Frazier. “She understood the cultural significance of it.” Together with Frazier’s own photographs of Ford, and of the former mill sites as they are today, the materials comprise Steel Genesis.

“I want people to think about history and time,” said Frazier during an October walk-through of the exhibit with City Paper. The roughly 100 wall-mounted prints and photographs span a century, some emphasizing just how dangerous mill work historically was. Three 8½-by-11-inch sheets are labeled “Fatal Accidents for South Side Works”; in 1912 there were nine, including “Joe Ozaklitch, head and right shoulder crushed.” Frazier pointedly arrays these documents beneath the covers of three 1945 issues of J&L’s in-house glossy Of Men and Steel, each with a portrait of a worker calmly performing his task.

What’s displayed aren’t the actual documents. Rather, Frazier scanned them only to reproduce them as prints on a manual plate-maker at Pittsburgh Filmmakers. She mixed the chemicals herself, often working through the night to consciously echo shift-work laborers. Many of the prints are cyanotypes, an antique photographic process that reproduces images in blue, symbolically summoning both architects’ blueprints and blue-collar work.

Historically, steel mills and mill workers were documented either matter-of-factly or in iconic images by the likes of W. Eugene Smith. Ford, by contrast, “had a very compassionate insider look at what life was like,” says Frazier. With photography forbidden on site, Gould made most of her images surreptitiously. Her photos, typically black-and-white, capture near-abstract industrial landscapes as well as intimate details like graffiti in shuttered buildings (“Goodby Mice + Rats”; a barbed “Pension Please”); a peach tree that improbably grew on one site; and the light bulb electrical-taped to the top of the engineering department’s Christmas tree. Ford’s own wall-text provides context; in one note, she writes that she photographed one particular room without entering so as not to desecrate the dust with her footprints. Frazier offers historical vantage with aerial photos of the mill sites as they are today: shopping centers, football fields, brownfields awaiting redevelopment.

Workers’ struggles are memorialized in documents including two typed 1980 letters from employees about the lack of African Americans at J&L. Gould even saved copies of corporate publication Countdown to Excellence, with the grinning executives on the cover rudely (if amusingly) defaced, presumably by workers.

Frazier’s contemporary portraits of Ford herself are part of her project to honor women in industry and the arts — with some long-overdue props for Ford in particular. Several portraits depict the writer, artist and educator in Braddock, for instance contemplating the reindustrialized former site of a residential high-rise where she and Frazier each once lived. A series of large-format cyanotypes capture Ford in her home studio, at the keyboard or quilting; a standout portrait finds her reading in a shaft of sunlight in Homewood’s Carnegie Library.

Frazier emphasizes that though Ford is no longer involved in making steel, she continues to create. Interviewed in September, Ford herself told CP that this show’s title casts steelmaking as a metaphor for people fabricating the lives they choose out of the raw material they’re given. Frazier’s signature portrait of Ford in the exhibit finds her in her home studio, proudly wearing her J&L jacket and holding her hard hat in front of a poster of the solar system.

Says Frazier of Ford, “I am her. We are just another version of each other. ... I see myself in her.”