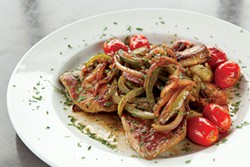 Aviva Brick Oven is located near the border of Warrendale and Cranberry, and also straddles the fine line between pizzeria and “nice” restaurant, which is to say, one with table service and a more than passing commitment to ambience. Aviva looks like a strip mall from the outside, but it’s actually one building divided into three distinct but interconnected sections: a takeout counter, which also houses the open kitchen; a bar and lounge; and a sit-down dining room, each with its own entrance. The ambience resides in the bar and dining room and consists of butter-yellow walls, espresso-dark furnishings, natural stone and tasteful, if generic, artwork. Aviva is the kind of suburban bistro you might walk into in flip-flops, then order a glass of good red wine.

Also, the brick oven in the name is for real. In fact, there are two of them, anchoring the takeout and dining rooms and underscoring Aviva’s upscale-pizzeria vibe. Since the menu is par for the pizzeria course — pepperoni rolls and stuffed banana peppers, Italian hoagies and a handful of pastas alongside the pizza — we were relying on those brick ovens to set Aviva apart.

Certainly, the kitchen doesn’t just fall back on rote preparations. Beans and greens, for instance, was made not with timeless escarole, but with current kale. It worked for a couple reasons: First, while escarole can melt into a brothy preparation, the kale, though wilted, retained its structure in a dish that was moist but not soupy. Second, the flavors were bold. Banana peppers and red-pepper flakes combined to give this beans and greens more than a little kick, which the robust kale could handle.

Stuffed banana peppers were more traditional, but a quick finish in the brick oven lent some browning to the melted mozzarella. The simple, straightforward tomato sauce took on a darker color as well, absorbing flavors from the peppers and meat. The menu notes the dish as a spicy one, but we found that, as always, it depended on the individual pepper, with Jason getting a fiery one and Angelique, one more mild.

Eggplant parmesan can be a bit of an enigma: Unlike most vegetarian versions of well-known dishes, it’s firmly canonical, yet it rarely does much to distinguish itself. The best versions are crisp, not soggy, and get along unobtrusively with the sauce and cheese. Aviva’s eggplant-parm sandwich was almost shockingly good, and the secret ingredient is ricotta: The kitchen wraps the eggplant around it and then proceeds as usual with sauce, melted mozzarella and a nicely toasted roll that’s not too tall or bready. In most bites the ricotta didn’t stand out as a component, but it added creaminess to the crisp crust and a certain savor to the eggplant itself.

Ricotta also worked its mojo on the housemade gnocchi, which were bigger than bite-sized and almost creamy in texture. Though easier to get right than potato gnocchi, ricotta ones are still a challenge for most restaurant kitchens, but Aviva has the knack. The tomato sauce — the same bright, fresh-tasting one that came with the peppers — nicely showcased this wonderful pasta without overpowering it. Meatballs were standard-issue, suitably tender with a flavor that was balanced, but unremarkable. 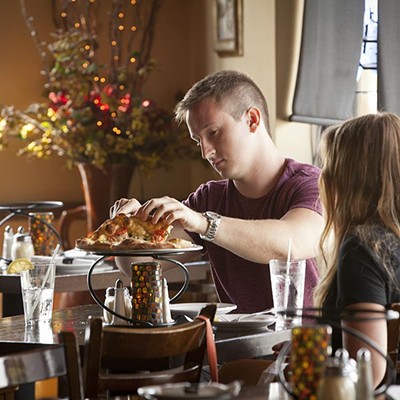 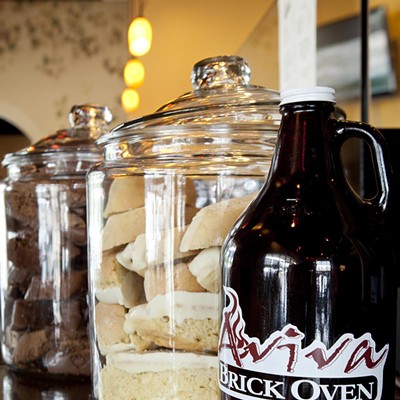 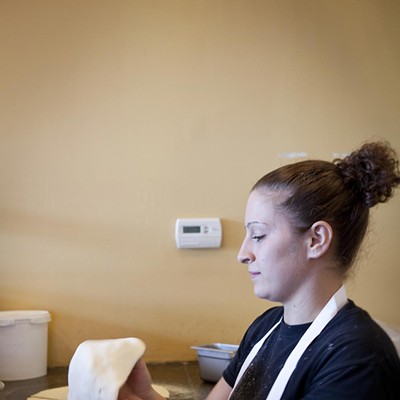 Pizza, of all things, failed to wow us. In addition to the classics and a broad list of a la carte toppings, Aviva offers a few distinctive pies with recipes borrowed from pasta favorites, like vodka sauce with basil and chicken pesto. In the latter, a thin smear of pesto was smothered by a thick blanket of housemade mozzarella, so that the pesto ended up acting more like a condiment than a sauce. We liked the big, juicy slices of tomato, the slices of chicken were fine, and the crust was medium-thin and deeply browned. But we’d hoped for more pesto presence.

The bread was more deeply disappointing. The promise of a brick oven is great bread products, but the slices that accompanied the peppers and the gnocchi were one step above supermarket white bread. And, while not the brick oven’s fault, the Caesar salad wasn’t worth eating. It was a spiritless pile of chopped romaine and stale croutons with, yes, shaved Parmesan but also a bland, almost flavorless dressing, the sort of thing you’d expect from a salad kit in the produce aisle, not a restaurant kitchen.

Those flaws notwithstanding, Aviva offers all the easy-pleasing appeal of a pizzeria with an atmosphere — and often recipes — clearly a cut above.