Many first novels are heavily autobiographical. But however convincing — and singular — is the story told in Robert Yune's Eighty Days of Sunlight (Thought Catalog), only fragments are drawn directly from Yune's own life.

The book's sardonic narrator, Jason Han, is a Korean-American who in a freak Boy Scouting accident gets bullet fragments embedded in his skull. He ends up separated from his immigrant blue-collar father and older brother, living with a wealthy surgeon in Princeton, N.J. Years later, after his father's suicide, Jason moves into his house near Wilkes-Barre, Pa., delaying college and joining his estranged brother and perpetual foil, Tommy, working at the huge paperback-book plant where their hardworking and distant old man labored (and trying to suss out why he killed himself). By the Y2K era, however, they've both become college students in Pittsburgh, an experience with its own set of trials and discoveries.

Yune, 33, is Korean-American. He was a college student here in the early 2000s, and he did work at a Wilkes-Barre book plant. But that's about it for overlap: Despite the plot's keystone of fraternal conflict, for example, Yune doesn't even have a brother (though he does have two sisters). Born outside Seoul, Yune was adopted as an infant by a white American Navy man and his wife, and by age 18 had moved 11 times to cities around the world and U.S. (There's a pinch of autobiography in Jason's foster family, inspired by Yune's grandfather, a prominent Princeton surgeon.) In 2001, as an undergraduate, Yune transferred from East Stroudsburg University to the University of Pittsburgh. He now lives in Squirrel Hill, teaches at Pitt, and has had short stories published in journals including The Kenyon Review and The Los Angeles Review. 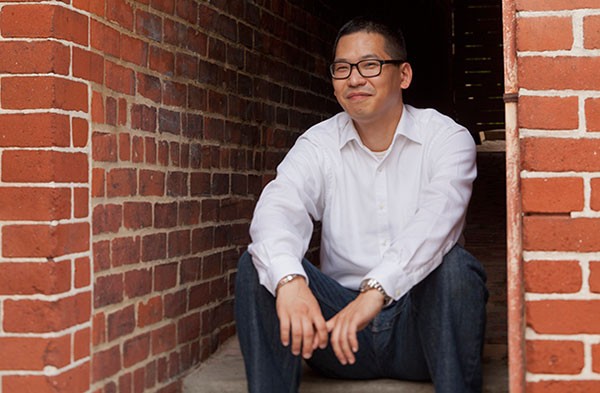 Yune wrote the earliest version of what became Eighty Days to fulfill a short-story assignment in an undergraduate seminar taught by fabled author and English professor Chuck Kinder. It was about three college students "drinking and acting like jackasses," says Yune. Kinder told Yune that the story had the makings of a novel, but added, "It's amusing but it can't go on, it's not enough."

Says Yune, "I had to sit and think, ‘There are these people who are doing things, but who are they really?'"

Eventually, the backstory emerged, and the two friends turned into brothers. The novel was Yune's grad-school thesis, and he continued working on it after graduating. With help from "a really smart edit" by Kinder, Yune completed the novel ... only to face rejection from 39 literary agents.

A few agents complimented the writing but told Yune they couldn't sell the novel. "It is difficult to imagine an audience for this," Yune acknowledges: It's not a standard coming-of-age novel, for instance. "I think people in publishing like books that they can easily fit into categories, because that makes them easier to sell. And this book really doesn't invite that."

Yune himself envisions an audience that includes Pittsburgh afficionados, college students and people in the limbo between college graduation and adulthood. But by 2013 he'd given up on getting the novel published. Then a former assistant to an agent, who'd liked the book, called him and requested it for her new employer, Thought Catalog. Eighty Days was published in June. Kirkus Reviews called it "moving and darkly comic" and "an accomplished debut."

The book is especially notable for its particularized and distinctive portrait of Asian Americans. Yune never wanted to write about racism, racial identity or the immigrant experience, because, well, that's been done. But at the least, Eighty Days of Sunlight (titled for Pittsburgh's supposed annual solar exposure) is an unusual take on those matters. Yune notes, for instance, that working-class Asian-American life is usually referenced only as backstory — not depicted in the firsthand way of Jason's often stupefied workaholic father, or of Jason finding a strange pride in taking his father's place in a hot, grimy, noisy factory. Nor, in a national literature replete with immigrants "making it," do we see often such strivers fail.

Likewise atypical are Jason and Tommy, contentious young screw-ups who'd fit no one's typed ideas of Asian Americans. "When I got to know the characters, they didn't seem to be ... the model minority," says Yune. "A lot of times when we see people who don't fit the stereotypes, we forget about them."

At the same time, Yune says, he shares as little personality with his narrator as he does biography. Better, he says, to think of Jason and Tommy as "two different aspects of my identity" that he depicted as separate people.

"He's not actually very smart," says Yune of Jason, "but he's very manipulative, and that's how he gets ahead. ... As a writer that was more amusing to me."