Author Irina Reyn on The Imperial Wife and the immigrant experience

“What I love about fiction is the ability to make history both accessible and relevant.” 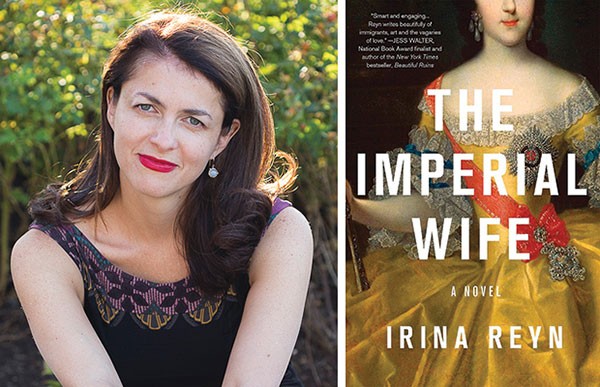 Photo courtesy of Aslan Habib Chalom
Irina Reyn
What is the immigrant experience? What does it feel like to leave behind one’s culture, forsake common language, shared foods and familiar traditions? What is the process of learning and adapting to a new set of norms and expectations? How does that complicated experience shape an individual?

Such questions are sparked by The Imperial Wife (Thomas Dunne Books, St. Martin’s Press), the second novel from Irina Reyn. More precisely, Reyn — who was herself born in Moscow — fleshes out the essence of the immigrant experience, specifically the female immigrant experience, through her masterfully crafted fiction.

Reyn, an associate professor of writing at the University of Pittsburgh, explores two sides of this same coin in parallel but intersecting stories. (How they intersect is cleverly maneuvered and a bit of a spoiler.) The book’s power is in the specificity of her portrayals of these two protagonists.

When we meet Tanya Kagan Vandermotter, a specialist in Russian art at a high-end New York auction house, she is juggling her ambition, a strained marriage and the biggest career opportunity of her life. As a Russian-born immigrant in the contemporary United States, she struggles with what a successful American marriage should be and how to navigate the sometimes dodgy world in which she works. As an art authenticator, she is also a “handler,” a person who deals with and sometimes manipulates potential buyers of Russian art, generally Russian men who made oodles of money after the fall of communism. Tanya refers to these men simply as “the oligarchs.” All of it brings her into contact with Russia as it was in the distant past, the Russia of her own childhood, and Russia as it is now.

“It makes my heart constrict for Russia, for the brilliant minds that have lived and been destroyed by it, for all that suppressed risk and innovation, the lines, the colors, the earthly and the sublime,” says Tanya. “Each year, I feel Russia slipping away, growing more dangerous and foreign. Once, as a Russian, I was the enemy in this country too.”

Reyn’s parallel story is that of Catherine the Great, specifically her early years in Russia. She arrived a princess of Prussia, promised to marry Petr, the grandson of Petr the Great and next in line for the Russian throne. These were the years during which Catherine honed her skills as a strategist and as a ruler; this was also the period in which her own ambition revealed itself, clearly and sharply. Reyn renders Catherine’s interior life beautifully, fleshing out Russia’s longest-ruling Empress as a young woman grappling with her own drive, while learning new customs and swimming with the political sharks in the Russian court.

It all serves Catherine well, as she moves her callow, ineffectual husband out of the way and takes the throne herself. There is some disagreement among historians about how this all shook out, but the result was that someone not descended from the royal line, an immigrant no less, became empress and ruled over Russia for 34 years (1762-1796.)

Reyn shifts seamlessly between the two narratives. Though she immersed herself in the story of Catherine to prepare for writing the novel, she believes the book is appealing even to readers who are not history buffs. “What I love about fiction is the ability to make history both accessible and relevant,” says Reyn in a phone interview. “That was what my aim was here — for even readers who are completely unfamiliar with the Catherine the Great story.”

Reyn’s first novel was 2008’s critically acclaimed What Happened to Anna K, and Imperial Wife is pulling plaudits even more widely, from The Washington Post to Vogue. Reyn fleshes out Tanya Kagan’s work life in easy prose, written with precision, not surprising considering Reyn’s view of work. “I’m really fascinated with jobs, period. I really wanted to talk about work, for both Tanya and Catherine. I’m just fascinated with what people do for a living and how their daily lives are shaped by their jobs.”

Reyn finds many discussions about immigration to be binary and reductive: “Some of it is cliché — like ‘the successful immigrant,’ ‘the immigrant narrative.’ There are these two complete opposites. One is, ‘Oh my god, [immigration] is so horrible, it’s going to ruin everything.’ The other one is, ‘Look at the prototype of the successful immigrant, they pulled themselves up by their bootstraps.’ It’s a very positive, very American narrative. The rising through the ranks from immigrant to success. And both of these stereotypes are two conflicted, opposing clichés. I’ve always been very interested in trying to unpack them, trying to knit what a successful immigrant is. And all the complexity that goes into the immigrant experience, if you’re the immigrant.”