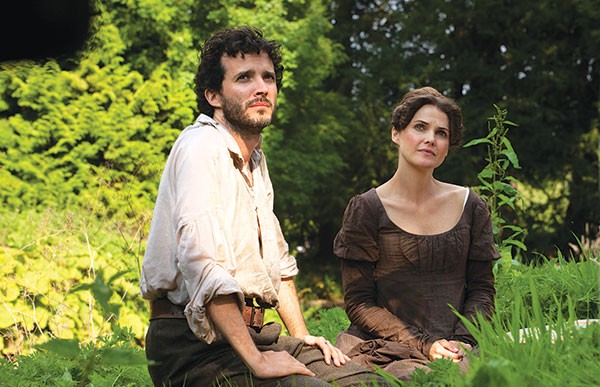 Jerusha Hess' Austenland portrays the comic outing that is an American woman's journey to the titular English resort that is an "immersive Austen experience." There, the Jane-Austen-obsessed Jane (Keri Russell) will don Empire-waist dresses, and swan around the grounds of a lovely estate, all while well-coiffed gentlemen vie politely for her attention.

Needless to say, things go wobbly from the start: Two other female guests (Jennifer Coolidge, Georgia King) monopolize the only two men provided (JJ Feild, James Callis), while Jane discovers her cheaper package means drab dresses and sleeping in the maid's room. She finds an unlikely ally and potential romance with Martin (Bret McKenzie), a scruffier fellow hired to portray the stableboy, but who is partial to belting out (forbidden) cheesy 1980s songs.

It's pretty low-hanging fruit to poke fun at any role-playing group, and the film lands a few smiles amid a rather slack plot. But the humor seems awfully broad for a film about Jane Austen, who, of course, is beloved for her more subtle but no less barbed comedies of manners.

Casting real-life costume-drama-queen Jane Seymour as the mistress of Austenland was a bit of inspired casting. But as much as I love Coolidge, her blowsy, boorish American-abroad act is like something retrieved from a century-old music-hall act. Gentle, good people. Regent Square