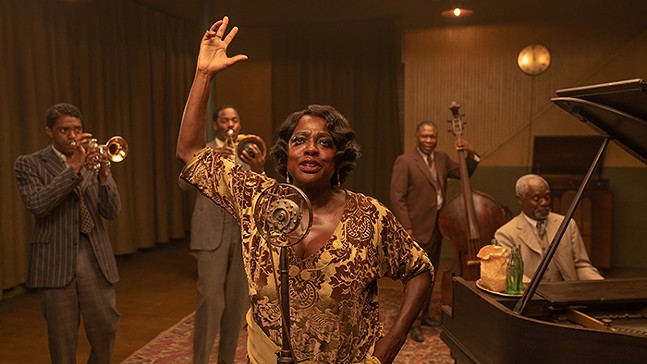 Photo: David Lee/Netflix
Viola Davis and Chadwick Boseman star in Ma Rainey's Black Bottom
The experience of watching the film adaption of Ma Rainey's Black Bottom is intensely bittersweet. Sweet, because of the privilege of seeing Pittsburgh playwright August Wilson's work put to film by some of the best actors of this generation. Bitter, because we're deprived of the experience of seeing it in theaters, and because one of its stars, Chadwick Boseman, died earlier this year and isn't around for the well-deserved glory this role gives him.

Ma Rainey — streaming on Netflix beginning Fri., Dec. 18 — is the latest film adaption of a Wilson work. Like Fences, the 2016 adaptation of his Pittsburgh Cycle play, Ma Rainey was shot in his hometown. The depth of Wilson's work speaks for itself, but the film, directed by George C. Wolfe, brings the story to life with vibrancy and vigor.

Set in Chicago in the 1920s, the film unfolds over the course of a tense recording session for a new album by Ma Rainey (Viola Davis), the real-life, legendary singer also known as the "Mother of the Blues.” Ma is accompanied by her band, a set of mostly affable men, save for Levee (Chadwick Boseman), an ambitious trumpet player with eyes set on his own fame and success.

While Levee thinks he's too good for Ma's songs, Ma herself has a (deservedly) big ego. Not only does she know the scale of her talents, but Ma understands that white-run record companies make good money off her songs. She knows her worth and made sure the white record producers know it. (In real life, Ma Rainey was signed to Paramount Records in 1923, just three years after singer Mamie Smith made the first ever blues recording.)

A series of setbacks, like Ma insisting her nephew with a stutter record the intro to her song, prevent the recording session from going smoothly. Ma's record producer and manager, both white, become frustrated with her demands, but are also desperate to keep their money-making act happy. In the time spent waiting on Ma, Levee pitches his own songs and flirts with Ma's girlfriend, while the rest of the band members, Slow Drag (Michael Potts), Cutler (Colman Domingo), and Toledo (Glynn Turman), keep their heads down and practice.

Levee's qualms lie with Ma singing what he feels is outdated music, and, of course, that Ma is the star and not him. The band mocks Levee for practically begging the record producer to buy his music, saying he doesn't know how to act around white people. As the audience learns, Levee knows from experience the dangers of white violence, and as a result, has developed his own way of maneuvering around white people.

Through Levee and Ma, Wilson explores race, religion, art, and money, all of which intersect in the play and film's criticism of the exploitative record industry and its historically (and ongoing) common practice of white record executives and producers undervaluing, overworking, and/or underpaying Black artists. In Ma Rainey, the singer is determined not to be taken advantage of, and defies her manager just to show that she can. In one scene, she refuses to begin singing until she is brought a cold bottle of Coca-Cola (Davis' slow and loud chugging of the soda alone is worth an Oscar).

The conflicts within the session don't end after they finally record a successful take. When Ma fires Levee, it's clear that all the unrequited anger from his life is about to come bursting out like a volcano. Throughout his several monologues, Boseman gives a shattering performance. He so obviously gave this part everything he had, like he may have known it was his last.

The film is engaging, not just for Wilson's work, or Boseman and Davis' performances, but for the music, the costumes, the makeup — all of it. Davis disappears into the role of Ma, with the help of exaggerated makeup, gold teeth, and padding that stay true to the real singer's appearance. Claustrophobia in the studio is telegraphed by Ma sporting a constant sheen of sweat, but even as she sweats, and her makeup runs, Ma is glamorous, especially in her long velvet dresses.

The story ends with a literal twist of the knife, but the final shot — one that isn't in Wilson's original play — is just as painful. Without giving it away, the ending will make you hang your head in disappointment at how much music has been ruined because white record labels feared the strength of Black musicians.