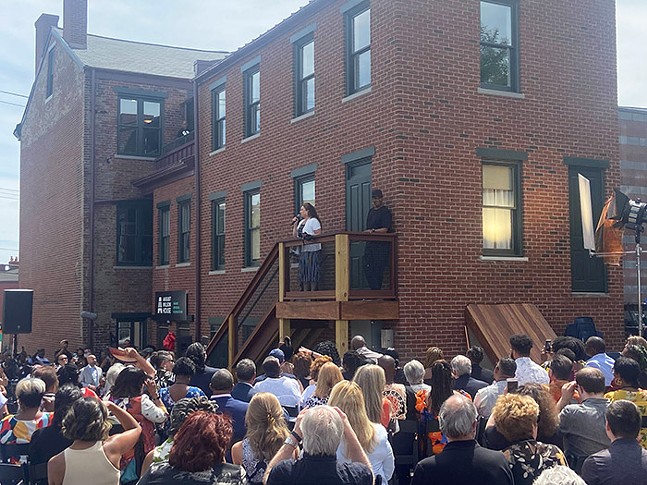 CP Photo: Dontae Washington
Costanza Romero Wilson, the wife of August Wilson, and Denzel Washington address the crowd during the opening of the August Wilson House on Sat., Aug. 13, 2022.

The August Wilson House officially opened over the weekend in a tearful and emotional ceremony, bringing over 500 residents, celebrities, officials, and local Black leaders to Pittsburgh’s Hill District.

The Bedford Avenue childhood home of Hill District native August Wilson, one of the greatest playwrights in history, was unveiled as a new community arts center, with a goal of connecting Black artists across the city.

“I want to thank the community because he is yours and you are his,” said award-winning actor Denzel Washington, who returned to Pittsburgh for the event after taking part in a community ground blessing of the building in 2018.

Washington, who directed and starred in the 2016 Pittsburgh-filmed Fences, based on a Wilson play, has been one of the top fundraisers for the restoration project, which has also brought in the support of other celebrities, including Oprah Winfrey and Tyler Perry who both donated $1 million each.

In an event not unlike the Emmy’s, guests walked a red carpet leading up to August Wilson’s former home during the Aug. 13 ceremony and were met with photographers and artwork from local artists honoring the playwright.

“There is not a child in this city who should not know the name August Wilson,” said Pittsburgh Mayor Ed Gainey during the event. “This speaks volumes of how far we come to recognizing African-American history in this city and celebrating the heroes that came before us."

Wilson, best known for his series of 10 plays called the American Century Cycle, often showed what life looked like for Black Americans in the 20th century. Upon his death in 2005, Wilson’s nephew, Paul Ellis Jr., wanted to continue his legacy.

“People actually told me that my vision was too big,” said Ellis, a longtime Hill District Resident, attorney, and founder of the August Wilson House. But, despite hearing doubts from donors, Ellis continued with the project anyway.

Ellis, who credits Wilson as being more of a father to him than an uncle, had the support of celebrities, residents, and foundations all over Pittsburgh and the country that provided both financial and emotional support in the restoration of the August Wilson House.

All eyes were on every speaker during the ceremony as emotions and tears could be seen and heard in each and every voice.

“Everything that August Wilson spoke about when he says ‘claim what is yours,’ that is what this center will now represent,” said Michelle Gainey, wife of Mayor Gainey. “It’s important that each of us have an opportunity for our children to come here to work and to claim what is theirs.”

Latasha Mayes, a local reproductive activist and the Democratic nominee for the Pa. House of Representatives, added, “The August Wilson House will mean legacy, power, and a new future envisioned for the Hill District. It’s about generations of Black people, families, and leaders. I think that we can create whatever we want, and the August Wilson House will reflect that.”

During the event, Pittsburgh Councilor Daniel Lavelle surprised Ellis with a proclamation from the city of Pittsburgh, declaring Aug. 13 to be Paul Ellis Day.

“Every person in this country should know who August Wilson is,” said Lavelle. “I would ask Paul to meet me up on site, and Paul has met me here for the past 10 years. Paul has been the quiet force behind all of this, so that is why we wanted to acknowledge Paul and give him his flowers today.”

“People must understand the Hill is not what you see on the news at 7:30 in the morning, it’s just not that Hill. The Hill is a vibrant, wonderful, and artistic safe space,” says Barnett. “We must change that narrative and we can only do that by helping with projects like this and reminding people of what the Hill District once was and what it’s going to become again.”

The event also brought in many of Wilson’s fans, including New York native JJ Winder-Wilkins.

“Jitney was the first play that I read in high school,” says Wilkins. “Hearing speakers talk about what the Hill District once was and how the city let it disintegrate to now putting back into the community is beautiful.”

Ellis says the center will help aspiring artists who are following in his uncle’s footsteps.

“My uncle gave a speech at Morehouse College in 1996. He said if you do not like a story being told then you tell it. As Black artists, we are expected to knock it out of the park from the very beginning and every time after that,” said Ellis. “That’s why the goal is to create a dynamic pipeline of major talent where aspiring artists can grow, teach, inspire, and learn from local and national talent. That’s exactly what we are going to do.”