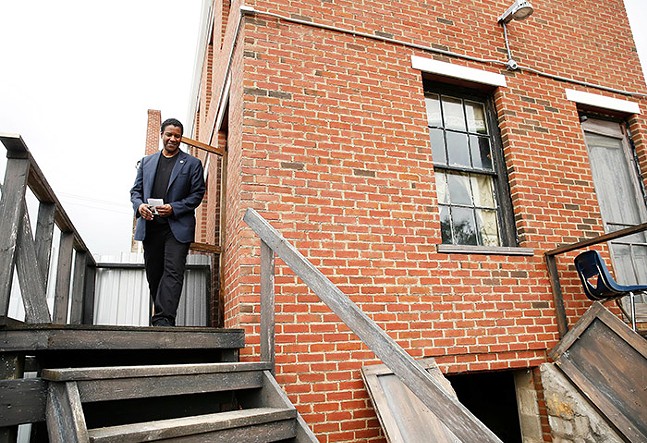 CP photo: Jared Wickerham
Denzel Washington, who starred in Pittsburgh playwright August Wilson's Fences Broadway play in 2010 and movie adaptation in 2016, took part in a community groundblessing at the August Wilson House in the Hill District on Wed., Sept. 26, 2018.
Paul Ellis remembers when his uncle, the Pittsburgh playwright August Wilson, delivered “The Ground on Which I Stand,” a speech calling out the American theater establishment for neglecting or dismissing Black theater companies and artists.

“That speech was, to me personally, one of the most courageous things I've ever seen anyone do ever,” says Ellis, who was 26 years old at the time Wilson delivered the speech on June 26, 1996 during the Theatre Communications Group national conference at Princeton University. “It was pivotal for me.”

That's why Ellis, an attorney who founded the Hill District-based August Wilson House, felt the need to comment when a coalition of BIPOC (Black, Indigenous, and people of color) theater professionals recently released "We See You, White American Theater," a statement condemning the industry for racist practices that also invokes “The Ground on Which I Stand.”

Yesterday, the August Wilson House released an official statement saying the organization “strongly endorses” the "We See You” statement and addresses how Pittsburgh is guilty of inequality in its own arts nonprofit scene.

“There have recently been a few local initiatives to address this deeply engrained structural racism — we think of a few attempts by some Pittsburgh companies — but they are far from enough, either in specific steps to engage Black artists or in determination to spotlight and attack racist White entitlement,” reads the AWH statement.

It goes on to say that members of AWH have “experienced firsthand every single action referenced in the ‘We See You’ statement,” which outlines how the still predominantly white theater industry exploits BIPOC workers, all while purporting to strive for inclusivity and equity.

CP photo: Jared Wickerham
Pittsburgh actor Wali Jamal, who has performed in all of August Wilson's plays, laughed with Jamaica Johnson while Allegheny County Executive Rich Fitzgerald looked on following her performance during a community groundblessing featuring Denzel Washington at the August Wilson House in the Hill District on Wed., Sept. 26, 2018.
“When I started reading through the indignities that they cited, there were things that I had personally observed and witnessed and experience, and so did everybody around me,” says Ellis.

This has become especially highlighted in the midst of nationwide protests against police brutality and systemic racism, with people calling out the what they see as hypocrisy in organizations, foundations, and companies releasing Black Lives Matter statements and promises of inclusion, even as they have been shown to engage in racist practices.

Ellis adds that while there are “feel-good initiatives” in Pittsburgh to connect foundations with local nonprofits that are run by and serve people of color, those efforts rarely make any lasting difference.

“It's been a cycle,” says Ellis. "They pay lip service and don't follow up. ... There's no change in the status quo.”

Another area touched on in the "We See You" statement is the difficulties non-white creatives often face when trying to secure foundation funding or other support for their projects. Ellis says this is a problem in Pittsburgh, where “Black-operated nonprofits” have to “jump through a myriad of hoops for relatively low grants,” and “consistently get overlooked for large donations, regardless of the creative approach to a known societal problem.”

His words are backed up by the Greater Pittsburgh Arts Council, which, in 2018, released a report titled "Race Equity in Arts Funding." The report found that 84% of non-white respondents believed the area's arts funding is inequitable. More telling was a demographic showing that, of the 218 local arts organizations that received grants between 2003 and 2017, 82% of them were “White, non-Hispanic” led, with 13% going to Black and African-American recipients.

Ellis believes it's important for AWH to take a stand against evident disparities in the system, especially as an organization dedicated to the legacy of Wilson, who he says worked to create opportunities and stand up for Black artists. He sees tackling the problem as benefiting the region where Wilson grew up and often portrayed in his plays.

“We love Pittsburgh, we really do,” says Ellis. “It's a great city, but we do think that practices that are oppressive hold all of us back, and we could be an even greater city if we work together to remove those practices.”