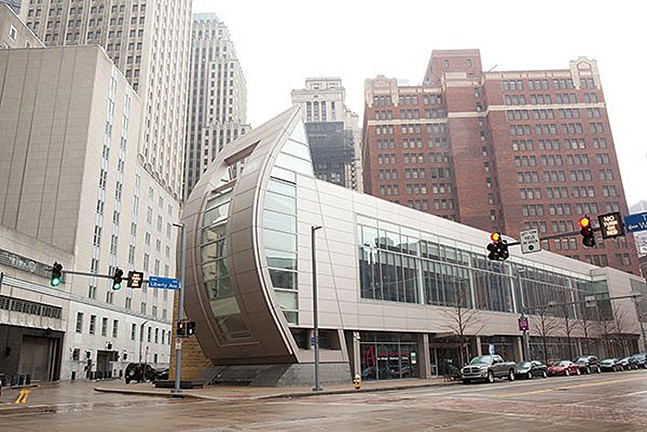 Today, April 22, the AWAACC announced that it received a $1.35 million grant from the Richard King Mellon Foundation, providing a major boost to the center's ongoing programming dedicated to showcasing Black artists, musicians, writers, and other creatives, and preserving the legacy of its Pittsburgh playwright namesake.

The latest gift adds is on top of $350,000 the RK Mellon Foundation gave AWAACC earlier this year to create its new B.U.I.L.D. artist-in-residency program. B.U.I.L.D. (which stands for Build, Utilize, Inform, Lead, and Develop) was designed for Pittsburgh-based emerging artists of color, and to create a "platform for diverse artists and organizations that have historically received unequal access to funding and resources for the development of new work."

B.U.I.L.D. residents will receive professional development, and access to the center’s artistic team and Downtown venue as they embark on creating original commissioned works.

Along with the grant, AWAACC also announced the inaugural artists for the two-year-long B.U.I.L.D. program, including visual artist, photographer, and filmmaker Emmai Alaquiva and Demaskus, a theater collective that is committed to developing a new work during the residency that will premiere in 2022.

“I am deeply appreciative to work with one of America’s prominent artistic institutions, the August Wilson African American Cultural Center, to create new work that is deeply rooted in the Pittsburgh community and that speaks to audiences around the country,” said Alaquiva.

He adds that he looks forward to working with AWAACC president and CEO Janis Burley Wilson and the rest of the team, which includes performing arts producer, curator, and consultant Baraka Sele, who will serve as the program’s lead producer.

While the RK Mellon Foundation has, for years, been a key funder for AWAACC, the latest grants demonstrate a continued effort to address how Black artists and creatives in Pittsburgh struggle to secure financial benefits usually enjoyed by their white counterparts. This discrepancy was highlighted when the Greater Pittsburgh Arts Council released its "Racial Equity and Arts Funding" report in 2018, the result of a 2016 community survey revealing that 84% of non-white respondents regarded arts funding in the area as inequitable. Among other things, the report showed that, between 2003 and 2017, 82% of public or private arts funding went to white/non-Hispanic led arts organizations.

Burley Wilson believes the problem still persists years after the report was released.

“The past year has amplified a prevailing fact — organizations managed by people of color and artists of color are disproportionately under-funded and under-resourced in the development of their work and in service to their communities,” says Burley Wilson in a press release.

Sam Reiman, director of the RK Mellon Foundation, says the organization is proud to support AWAACC, adding, "And we are particularly gratified to help provide Pittsburgh’s emerging Black and minority artists with a meaningful platform to share their art with the community and the world.”

As for current programming, AWAACC reopened to the public in September 2020 with new gallery hours and various safety measures put in place as a result of the COVID-19 pandemic. The Center is still offering a robust selection of online programming, as well as in-person gallery shows and events planned for the future.

“The Center has long been dedicated to celebrating Black culture and championing future innovators in the arts," says Burley Wilson. "I am incredibly grateful to the Richard King Mellon Foundation for their ongoing support of this project and the AWAACC. I look forward to building a new pipeline for creativity and sharing Emmai Alaquiva’s and Demaskus’ commissioned works with our community and with cultural organizations and partners across the country.”