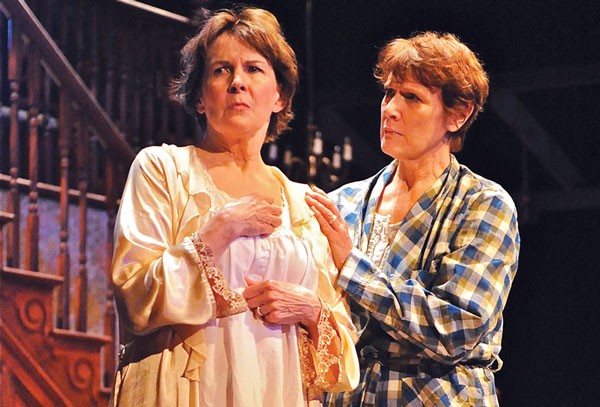 A classic thespian motto is that there are no small roles, only small actors. This is a lie, of course, to make actors feel better. There are plenty of small, sad, pathetic roles in theater, and the truth is that nobody wants to play the maid. Meanwhile, when August: Osage County premiered in Chicago, in 2007, playwright Tracy Letts presented a play with a gigantic cast, a sprawling story and a three-hour running time. And yet, every single role is noteworthy. No sane actor would turn down a single billing in August.

Now presented by Pittsburgh Playhouse REP, August is a theatrical leviathan. It's like Howl and Magnolia and Infinite Jest, a massive cat's cradle of drama that requires a dozen principal characters. August is Letts' anguished masterpiece, an itemized manifesto about the corruption of modern life. He rails against prescription drugs, passive racism, generation gaps, even dietary differences. And at the heart of August is the titanic collapse of the American family.

John Shepard directs a no-holds-barred production, perhaps the definitive Pittsburgh August for years to come. Stephanie Mayer-Staley's prairie-house set is jaw-dropping. Likewise, the copious blocking and lines are rehearsed and refined to perfection.

Many critics argue that August invented nothing, only refracted older family sagas, like Cat on a Hot Tin Roof and Buried Child, through the lens of Generation X. Maybe that's true. But where Tennessee Williams permitted voiceless servants, August offers meaty roles to everyone involved. Even the bratty 14-year-old, played here by Courtney Neville, flaunts the full spectrum of teen-age emotion. Even Johnna Monevata, a quiet caretaker, practically glows with humanity, thanks to Erika Cuenca's subtle choices.

But August is most famous for Violet Weston, the family's matriarch with a scorched-earth philosophy. She is among the most frightening and hilarious characters in modern theater, the Hamlet of mature and powerful women. Long before I attended August this weekend, Pittsburgh was abuzz with Mary Rawson's performance as Violet. Let it be said that Rawson far surpasses the unnecessary hype. Violet is cruel, meddling, quick-witted and bat-shit crazy, and Rawson carries her characterization the extra mile. August forbids small roles, it's true, but neither does it suffer small actors. How the REP will ever transcend this, I can't imagine.