This production is spellbinding. 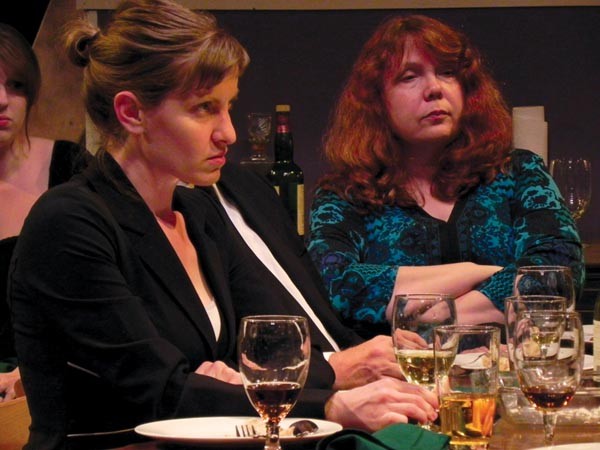 Everything about August: Osage County, by Tracy Letts, is big. The story is big. The cast is big. The script is big — three acts, with two intermissions. The personalities are big, especially Violet Weston, a chain-smoking old matron with mouth cancer and a pill addiction. Osage is like a Tennessee Williams play mashed into a Eugene O'Neill play stuffed into a Sam Shepard play, a veritable turducken of family chaos.

Throughline Theatre has tried something different: Take the 21st century's most epic super-drama and produce it on a shoestring. No gigantic set. No high-caliber Equity cast. Not even that signature staircase. Just a little black-box production, with some talented local actors and shrewd blocking. What would happen?

This production is spellbinding, especially for audiences that have never seen Osage before. It is impossible to summarize this three-hour tragedy and its intricate plotting. To say that divorce, suicide, terminal illness, substance abuse, incest and pedophilia are prominent themes hardly scratches the Midwestern surface. To say that it takes place in a country home with no natural light is like saying Titanic takes place on a boat. Osage is a millennial answer to American Gothic, a frisky ensemble piece full of screaming and epiphanies and secrets blown to hell. And the brave Throughliners have now proven that you can do it all with one sofa and a dining-room table.

What's remarkable about Osage is its wealth of interesting women, given that Tracy Letts is a man, and a master of bloody thrillers besides (Bug, Killer Joe). As Violet, Patricia C. Fuchel is playing the role of a lifetime, and she probably knows it. Fuchel thanks her acting coach in the program, and it's clear that lessons are paying off. Sixteen-year-old Madison Kaye Cofield plays the rebellious teen Jean Fordham, and although she is playing young (14), her maturity onstage is prodigious. But the ultimate standout is Amy Portenlanger, area actress and comedienne, who brings boundless energy to her role as Barbara Fordham, feisty academic and alpha wife.

Joseph Ryan Yow is a young director, but he has already accomplished the impossible. Osage is not perfect, but for a humble new company like Throughline, it's a profound showcase.