“Every time I come up here, I see something else I haven’t seen before.” 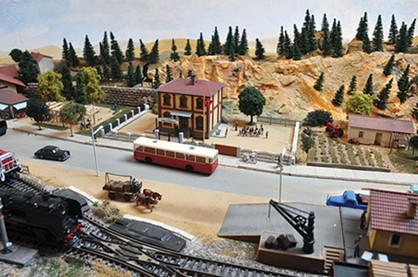 Turkey is far away from Enis Koral’s Edgewood home.

The Turkey of Koral’s childhood is alive in his attic.

“This is what I remember,” he says, ushering a visitor up some narrow stairs, through a narrower doorway. “My father used to take me to the railroad station when I was 5, 6, 7. He would read his Sunday newspaper; I would watch the trains.”

Before us is a railroad layout to rival the Carnegie Science Center’s holiday display, if not in size than certainly in execution. A coal train chuffs into life, heading through a mountain tunnel. Men are loading crates into a stationary car of another train. Flocks of sheep and cows graze between rural villages, with their ovens outside in gated courtyards, surrounded by children and ducks and women in headscarves. Through these hamlets are travel farmers on tractors and families in German- and American-made cars from the 1950s and ’60s.

There is a machine shop and a brick-making building, a railcar depot, bridges and trees. There are oxen- and horse-drawn carts and a shepherd with staff, wearing the garment in which he walks and then wraps himself to sleep on the ground when night falls.

Koral made the shepherd’s traditional cloak from a painted paper towel. The Turkish flag flying from the depot is aluminum foil. Both are entirely convincing.

Men play backgammon at a table in a park. Other men are cutting wood. The railway worker’s house, from which he emerges to man the gate, has a garden of vegetables and flowers. There’s a mosque, a water tower to run the steam engines, and an ice-cream seller ferrying his goods in a box on the front of his bicycle.

“Every time I come up here, I see something else I haven’t seen before,” says his wife, Mimi, ducking into the room. She’s not Turkish, but “I’ve been through the Turkish countryside many times on the train; I can tell you that a lot of it still looks like this.”

Through it all, five HO scale (1:87) trains travel. They are half the size of the Carnegie’s many engines.

Koral’s father sits cross-legged on a Goncali Station bench, while Koral, a tiny child, stands on the platform, peering for the train. Students in uniform play outside his Gazi Ilkokulu elementary school nearby, shadowed by a large image of Mustafa Kemal Atatürk — “the George Washington of Turkey,” Koral calls him, the hero of the country’s 1920s independence fight.

Because Turkey’s railroads were built by the Germans before World War I, he uses German train cars. He recreates station signs from images he can find in old photographs online. The ceiling of the room is painted as the sky.

Koral was born in Denizli, in Turkey’s Aegean region, then moved around with his teacher parents, including to Izmir, the country’s third largest city, then on to university in Ankara. A NATO scholarship landed him in Pittsburgh, at Carnegie Mellon University. An IT career has taken him most recently to FedEx.

He began reconstructing his hometown memories in Edgewood in 2006. It took him five years. He held an opening for friends, printing up invitations as old Turkish railway tickets.

Koral has long been recreating other parts of his harborside childhood, including a 1930s steamer tug, with a paint scheme after the Turkish Maritime Lines. It was built from a kit, but plank by plank, with added detail down to blackening the edges to show the slight gap between each piece of wood.

“I love tugs, workboats,” he says. “They are powerful. They don’t move fast, but as they move, you can enjoy it.”

And just for fun, there is the scratch-built privateer, the Rattlesnake, a large sailing vessel from the 1700s. It has a wooden hull and deck and spiderlike rigging.

Turkey — the actual country, not the one in Koral’s attic — faces the fight against an encroaching ISIS, but Koral isn’t worried. “Turkey is not in danger,” he shrugs. NATO brought him here a few decades ago; it will make certain Turkey remains safe today.

Here, the incandescent sun dims overhead and little lights come on in the windows of houses in faraway villages and inside the short-line passenger train. We are “somewhere in Turkey,” Koral says — nowhere specific, he assures.

“There is no blueprint,” he says, adding: “This is not really complete. I change things here and there — like in real life, cities and landscapes change.”