“We wanted a snapshot of the present”

After 18 months of creative workshops, community-engagement programs and information-gathering about the hopes, fears and attitudes of North Side elementary and middle-school students, Attack Theatre presents Remainder|Northside, Nov. 13-14 at the New Hazlett Theater.

The 90-minute program is danced to live original music by Attack music director Dave Eggar, frequent Attack collaborator percussionist/songwriter Chuck Palmer and special guest flutist/singer Domenica Fossati. The show celebrates and explores those things that make the neighborhood and its youth both unique and, in many ways, universally relatable. 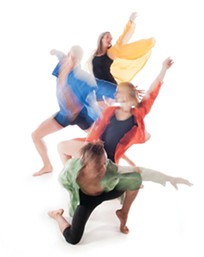 Attack’s own ties to the neighborhood include a long history of performing at the New Hazlett. But as Attack co-founder and artistic director Michele de la Reza says, “We wanted a snapshot of the present”: what the North Side is like now and what it might become through the lens of its youth. “All of this information collected came together to create a new work of art rather than creating a dance documentary of the process.”

For Remainder, each of Attack’s five dancers in this work (including de la Reza), adopt a specific character that is based on an amalgamation of thoughts and feelings culled from a number of North Side students, which is then interpreted generally. The work also references the neighborhood’s connection with the Underground Railroad and such landmarks as the giant lantern sculpture and footprints both located on the grounds of Perry South’s The Pittsburgh Project.

Eggar sees the music as being exciting, fun and grooving, with a cinematic flow. A strong proponent of artist/community-engagement projects, the Grammy-nominated Eggar, who tours the world with rock bands and composes movie soundtracks, says that projects like Remainder keep Attack Theatre a high priority in his artistic endeavors.

Both de la Reza and Eggar feel that with works like this, at some point in the creative process they take on a life of their own.

“There is a tipping point where the show starts to tell you what it is about rather than you trying to make it something,” says Eggar.

What Remainder|Northside is telling Attack, and hopefully the show’s audiences, is something about a place they call home.