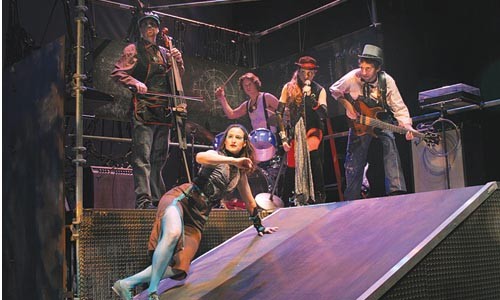 Attack Theatre's Michele de la Reza (foreground) with Dave Eggar, Matt Zebroski, Dina Fanai and Tom Pirozzi, from left.
Metallic rattles and screeches give way to Bowie-esque piano balladry as black-clad figures prowl the stage, engaged in fierce kinetic competition. As the band looks on from its lofty riser, three figures entwine in a way that seems dangerous ... and yet playful. I mean, there's a giant steel seesaw. Judging from the costumes, this could be a deleted scene from Mad Max, or Bladerunner, or even The Warriors. But anyone who glimpsed it at last year's Three Rivers Arts Festival knows it's Attack Theatre's Games of Steel, which returns from a national tour for a final three-day Pittsburgh run this week at the Kelly-Strayhorn Theater.

Combining the company's dancers, under Artistic Directors Michele de la Reza and Peter Kope, steel sculptures from Red Star Ironworks, and a live avant-rock score, it might be harder to pin down what the piece isn't than what it is. Dance? Of course. Theater? Well, there's a plot I can follow. An art-rock-opera? Bingo.

Industrial sounds and screeching metal a la Einsturzende Neubauten mesh with sonorous, modal strings and Queenly bombast, even decadent, Waitsian waltzes, propelled by grooves at times fractured, at others Zeppelinesque. In assembling the music for the live performance, Attack Theatre's longtime composer/musician Dave Eggar has welded a grab bag of spare musical parts into a unified yet multifaceted construction.

Eggar, whose onstage duties include electric and acoustic cellos and occasional vocals, is a Harvard and Julliard grad with performance credits that include Ornette Coleman, Yo-Yo Ma, Sinéad O'Connor, and a little band called The Who. Joining him on the riser are three seasoned pros: Tom Pirozzi (bass), Pittsburgh native Matt Zebroski (drums) and Dina Fanai (vocals).

Fanai, also a vocalist with the Trans-Siberian Orchestra, interacts most with the dancers on stage, frequently narrating or explicating their actions in song. When she cranks open her power-ballad pipes for "House of Steel," it seems like a sure-fire adult contemporary hit, if given the Peter Gabriel-Kate Bush treatment. But the art-rock side of the music is most apparent when Egger takes the mic, asking, "Who will play the game?" in a tense tenor reminiscent of Marillion vocalist Fish (who would undoubtedly approve of Games of Steel in its entirety).

Whether it's the original music, dance or theatrical elements that engage most directly, Games of Steel seems to impart a sense of personal agency and individually meaningful interactions within a harsh, polished technological and industrial framework. Fluid bodies in competition with, and perhaps ultimately transforming, steel -- whether a steel ring, or a steel string.