If I were an Ayn Rand fan, I'd be insulted by this tepid feature. 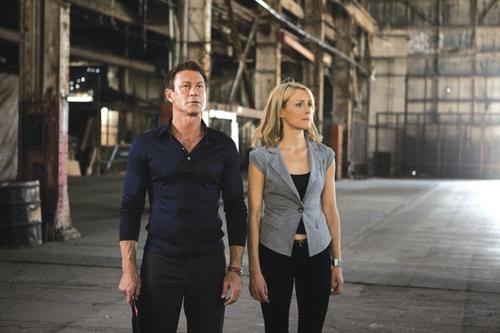 In Atlas Shrugged, it takes train magnate Dagny Taggart and steel-maker Hank Rearden only a year to re-construct a railroad of the future through the Rocky Mountains. Yet it reputedly has taken two decades to develop this adaption of just one-third of Ayn Rand's 1957 novel.

Nobody said making art was easy.

Nor, according to this work, is maximizing unfettered capitalism, at least not until the political stooges and free-loaders get out of the way. The shucking off of non-believers and the creation of that expressway -- "a society that celebrates individual achievement" -- comprises the first part of Atlas Shrugged, now set in 2016. Hopefully, the production team will get on a more accelerated schedule, or some of us may not live to see Part Two and Three. (Spoiler alert: Part Three is likely to be a two-hour speech.)

It's not worth arguing the merits of Rand's philosophy here: This film was made by adherents (with a shout-out in the credits to Ronnie James Dio), and it won't change any minds. Viewers will either applaud the carping about how government stifles capitalism, or will leave thinking such theories are crazier than ever. (At my screening, the most appreciative applause was generated when a phone message from a union leader was tossed into the trash.)

I've long thought that Rand's novel, stripped of its windy speeches and economic proselytizing, would make an excellent mini-series: a romantic potboiler combined with a sprawling industrial saga and family feud, mixed with a splash of mystery (see also Dallas, Dynasty). But alas, Atlas is strictly TV-movie caliber, a dull, low-budget talkathon that doggedly sticks to its polemics. Maybe if the actors were more dynamic, there'd be more thrill in such pronouncements as, "It's us that move the world, it's us that'll pull it through." But this crew is flat, resembling a collection of budget-priced TV-news anchors.

Only Taylor Schilling (from TV's Mercy), as Dagny, brings a smidgen of vibrancy to her criminally underwritten role. A willowy, cool blonde, she adeptly mixes board-room savvy and ball-busting with a chic wardrobe and one facial expression.

If I were a Rand fan, I'd be insulted by this tepid feature. (How come these free-market apostles couldn't put together the funding for a decent production budget?) Nor is this a film for the curious who can't be bothered to read the book. Much has been condensed, and newbies won't be able to keep track of the dozens of characters (some of whom only have a line or two). Nor will they be likely to understand what happens at the end of Part One, or fill in the passion and urgency that is sorely lacking.

Only the informed could appreciate a mystifying exchange such as the one Dagny has with her ex-lover, a Mexican playboy. "Where is the man I used to love?" she asks; "Who is John Galt?" he replies.