At Wood Street, robots draw a Martian landscape and copy the Bible 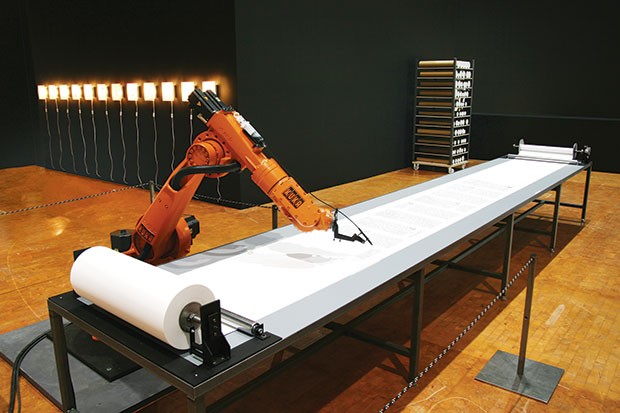 In Robotlab’s “Bios (Bible),” a machine copies the Bible, in German

With an exhibition spanning six months, “Bios (Bible)” and “The Big Picture,” installed at Wood Street Galleries by Germany’s Robotlab, have considerably longer running times than most shows there. The longevity is deliberate, necessary and painstakingly calculated: It’s the period required for the works to be completed, with the artists confined within the gallery walls from first stroke to last dot.

This approach is not self-indulgent, cruel or parasitic, considering that the artists here are man-made. Robotlab develops works incorporating industrial robots in public spaces. At Wood Street, the robots are armed with ink, set beside inkable surfaces, and encoded to mark one with the other until words and image ensue. Even as you read this, “The Big Picture” is busy duplicating an image transmitted from Mars of that planet’s landscape with a single line, while “Bios (Bible)” is copying the text of one of the most pervasive literary works of Western mythology.

While they’re superficially identical at a glance — big orange metal contraptions stain paper according to the data with which they have been programmed — the contrasts between what is being set down in the two pieces is drastic. “Bios (Bible)” replicates a story written by man in a language developed by man, of a god whom many believe was created by man. “The Big Picture” captures something unseen by man, visible only in an image man is able to view through the utilization of technology.

Observing these works in progress, it can be difficult to keep in mind that the robots we view creating them are not actually the artists, but the tools of the artists. With our own eyes, we watch one of them meticulously scrawling a single line to tattoo a canvas with the image of an environment we’ll never see with our own eyes; the other robot we see producing line after line after line of text, calligraphic, in German. To us, they are the creators, at least during the part of our experience of this work that exists within the gallery’s walls. While we know there are humans behind this, their involvement is not obvious. The choice of subject matter is theirs, but while that subject matter is a monumental part of the work, the human contribution is still not evident in the simple act of viewing. We know that contribution is real. But as a part of our emotional, visceral response to work superficially produced by machines with neither emotions nor viscera, it’s invisible. 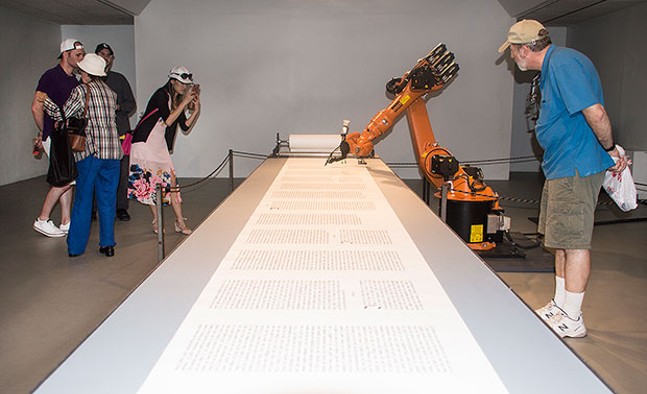 The immediate reaction of some viewers will be to anthropomorphize these machines, which will in turn bring admonishments from those disinclined to anthropomorphize anything. This divergence of opinion might even become a polarizing factor: The former observers will be analyzed as impractical and overly imaginative, the latter regarded as the kind of folk who don’t make up songs for their dogs. As with all art, either response is valid.

For those of us in the latter camp, the response doesn’t stop when the continuous line replicating the red rocks of the fourth planet comes to its final point, and the act of creation for the drawing robot on this floor has reached its end. At this point, the writing robot on the floor above will have its work interrupted, and the project will not reach fruition. (For us anthropomorphizing types, this spurs concern that the device should at least allowed to finish the paragraph it is in the process of transcribing and not be disturbed mid-sentence.) Although the work stops, the machines continue.

Replacement of human workers by robots is much in the news lately, and Wood Street’s Robotlab show inspires further thoughts on the matter. Human artists, when successful in the fulfillment of their intentions, finish one work and begin another, then again, then again, then again. At any given time, they are likely to have various projects at various stages. They have the capacity to change what they’re directing their attention toward, and they have the ability to move forward, consistently, always. They can expand. They can improve. Each of these robot artists is limited to an oeuvre of one and, as an entity, is unmotivated to desire anything more. We might be inclined to romanticize this situation, considering what we could call the human artists’ destinies through a human lens. But the artists themselves won’t.