“We should have had free water on site at all times.” 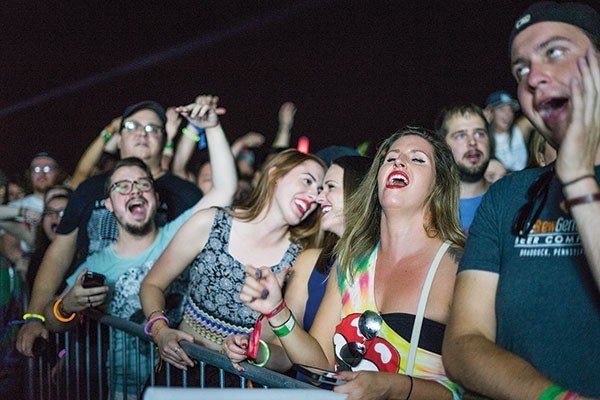 By many measures, this year’s Thrival Innovation + Music Festival was the most successful one yet.

Now in its fourth year, a record-breaking 9,600 people descended upon Rankin’s Carrie Furnaces on Sept. 23 for the first night of Pittsburgh’s largest music festival. Many were drawn in part by EDM headliners The Chainsmokers, whose track “Closer” sat atop Billboard’s Hot 100 chart in the weeks leading up to the event.

But it turns out festival-goers were in for a bumpy night. Friday at Thrival brought out not only the biggest crowds, but also the biggest lines, with attendees complaining of waits that stretched upward of an hour for food, beer and, most critically, water, which was being sold for $2 a bottle. And unlike last year’s festival, there was no free water station on site Friday.

“Water bottles are sold out at different locations,” festival-goer Elizabeth Warren wrote on Thrival Festival’s Facebook page that evening. “Hydration is key in this heat! [I]t’s disappointing enough to not see water stations, but those still willing to fork out $2 a bottle still need it!”

Water sales Friday were limited to two beverage stands operated by the festival, each with two point-of-sale systems apiece. Outside food trucks and vendors were prohibited from selling water and other beverages, and both empty refillable bottles and factory-sealed water bottles were confiscated by security upon entry.

“All [I] wanted was a fucking water, and after [I] was told they were all sold out, I was supposed to wait in another hour-long line just for tokens to buy said water? And then stand in the water line for another hour?” Mike Farinelli wrote the following day.

Exacerbating matters was a payment system that required patrons to pay with cash or credit card for food and alcohol, and with tokens for water and other non-alcoholic beverages. This meant patrons had to wait in one line to purchase tokens and then a separate line to purchase water, at which point many discovered that water was temporarily unavailable, on a day when temperatures reached 87 degrees.

This was the experience of Hugh Dunn, who told City Paper that at 7:30 p.m. he waited in line for about 30 minutes to buy tokens for water. Then, he says, after waiting in the water line a short time, “The vendor told me they and the only other vendor had no more water.”

Dan Law, executive producer for Thrival Festival, says the event always had plenty of water on hand and that any gaps in service stemmed from the time it took to transport the water from where it was stored to the two beverage stands, a process that took about 30 minutes in a frenzied festival environment. He says that a massive influx of people began arriving around 6 p.m., before the headlining bands performed, pushing the first-time festival venue’s capacities to the limit.

“Both [stands] eventually temporarily ran down its stock of water, and they both needed to be replenished,” says Law. Furthermore, he is emphatic that at least one stand always had water on hand throughout the evening.

From 9:45 to 10:15 p.m. Thrival organizers left several replies on their Facebook page telling frustrated commenters that they were in the process of bringing more water out to vendors. When the water arrived, staff members began to walk through the crowd and pass out free water to attendees, especially to those in front of the crowd.

On Saturday, restrictions on outside water bottles were lifted and a 2,500-gallon water tank was brought in to provide free water.

Law calls the decision not to provide free water on Friday “a simple mistake.”

“We should have had free water on site at all times,” he says.

Thrival is an initiative of Thrill Mill, an East Liberty-based 501(c)(3) organization dedicated to supporting early-stage startups and regional entrepreneurial growth. The two-day music festival is preceded by three days of panels and discussions about technology, culture, entrepreneurship and more. UPMC Enterprises is the presenting sponsor.

Asked for comment on Friday’s water shortages, a UPMC spokesperson directed all questions back to Thrival.

“Thrival has two main purposes,” says Law. “The first is obviously to raise the profile of Pittsburgh as place that is a hub of creativity and ingenuity, of start-ups and ideas, but it is also a revenue-driving mechanism for Thrill Mill as a nonprofit. So when we do charge for vending services, it is not because we are greedy misers, it’s simply because we are trying to make the festival and the organization revenue-positive.”

Law says a handful of people were treated by on-site medical staff for a variety of issues, but none were deemed medically dehydrated. Seven people were taken away by ambulance Friday for issues related to alcohol intoxication, a figure that was confirmed by Swissvale Fire Chief Clyde Wilhelm.

Lauren Paige Zabelsky was one of the first to comment on water problems on Thrival’s Facebook page. Contacted by CP, she reaffirmed a post she wrote from the festival stating that she saw teenagers drinking from the non-potable hand-washing station.

“Even if they weren’t drinking or on drugs, they were outside and it was hot and they were dancing. They needed water. Being a teen librarian, being responsible for kids is something I can’t turn off,” she says.

Ashley Corts was at Thrival as a vendor for Black Forge Coffee House. She estimates that around 50 people, primarily young adults, stopped by throughout the day to ask for water, which they (and other food vendors) were prohibited from selling.

“They were literally begging us for this lukewarm coffee-flavored water that sat in our percolator,” she says. “I felt awful.”

One attendee, Chuck Cramer, says he went to Thrival to see Chvrches and Metric specifically, and that he would have paid the cost of his entire festival ticket to see just one of those bands perform live. He waited in line for about 20-30 minutes to buy tokens and another 20-30 minutes to buy water. Nevertheless, he believes that festival organizers “definitely did a really good job with addressing almost every major concern overnight.”

Cramer’s sentiments echoed that of many online commenters who were frustrated with services the first night, only to express thanks to the organization for addressing the shortcomings and providing a much improved experience the second evening.

On Saturday morning, Thrival organizers took to Facebook to apologize to those who were disappointed and to reassure everyone that they took the complaints very seriously.

“We want to build something that the city as a whole can be proud of, something that shines a positive light on this amazing city,” one post said. “We’re still growing and learning and hope that you’ll stick with us through the messy patches that come with that growth. Thank you!”