At the Miller Gallery, anti-corporate pranksters The Yes Men Keep It Slick.

With thrift-store suits, an arsenal of aliases and a dangerous awareness of business culture, the Yes Men organize acts of guerrilla satire against some of the world's most formidable and morally bankrupt market forces -- by posing as one of their own. Such "identity correction" is meant to highlight the destructiveness of Dow Chemical, the World Trade Organization, Halliburton and others, to "humiliate them for conspiring against the public good." The group's more recent stunts include the proposal, supposedly on behalf of the WTO, for a modernized brand of corporate slavery they silver-tonguedly call "full private stewardry."

By necessity, an exhibition featuring such provocateurs will be mostly a visual documentation of their work, rather than the work itself. The group's activities rely on the element of surprise, as well as the targets' complete unfamiliarity with its oeuvre. The Yes Men's actual performances can be observed only at a specific place and time, by people who never intended to see them. At the Miller Gallery, however, you can at least peruse their set pieces and PowerPoints, and educate yourself a little on the techniques of corporate subterfuge.

Keep It Slick: Infiltrating Capitalism With the Yes Men is a logical follow-up to Your Town, Inc., the first outing of the Miller's new curator, Astria Suparak. In that exhibit, Suparak brought in Julie Christensen to visually catalogue communities appropriating the spaces left behind by relocated big-box retailers. The Yes Men take a more radical approach, appropriating the guise of the establishment itself.

The first floor of the Miller has only one display: a video loop of news coverage of some of the Yes Men's more media-worthy exploits. Included are clips of what has been their most famous con -- the portrayal by core Yes Man Andy Bichlbaum of a U.S. Housing and Urban Development official in post-Katrina New Orleans. HUD had slated 5,000 undamaged low-income housing units for demolition; a disguised Bichlbaum promised, among other things, to preserve this housing, and even staged a ribbon-cutting ceremony at the housing projects.

The gallery's third floor, which houses the bulk of the exhibition, is largely a run-through of the Yes Men's tools and methods. The visitor first encounters a table full of name tags and ID badges bearing names like Jude Finisterra and Granwyth Hulatberi, forged for the Yes Men's shenanigans. Then there is a recreated shrine to the fictitious ExxonMobil janitor who donated his body to be processed into the company's new energy source -- "Vivoleum." (Candles purportedly made of the substance, complete with real human hair, were distributed to and lit by unsuspecting attendees of an oil-industry conference.) Spanning the gallery is a diagrammatic wall painting of white-collar wearers of the Surviva-Ball protective suit (a fictitious Halliburton product) floating across a post-apocalyptic landscape. One wing of the gallery is mostly filler, though the partitioned office set-up has a few gems if you're willing to dig for them, like Bichlbaum's etiquette instructions to himself, included in his laminated speeches.

Curator Suparak has demonstrated a knack for exhibiting the work of those who require a hyphenated addendum to the word "artist." The Yes Men betray no overt connections to, or interest in, the art scene itself. They seem to frankly consider themselves as artful protesters rather than artists per se. So it's only natural that Keep It Slick is an unorthodox show, and that it has its wonkish bits. Because the real punch of the Yes Men's work is time-and-site specific, the show must be a museum of the ephemeral. But the ephemera are visually strong and sensitively displayed. Like good salesmen, the Yes Men and Suparak draw you in, keep it snappy and keep it slick. 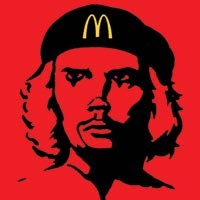 Image courtesy of The Yes Men.
From each according to his advertising budget: The Yes Men's McMascot McChe Guevara.