At the Frick, a touring show of vintage paintings highlights interesting, lesser-known works by well-known artists

Paintings by Gilbert Stuart, Frederic Edwin Church and Mary Cassatt are among those prompting career reassessments 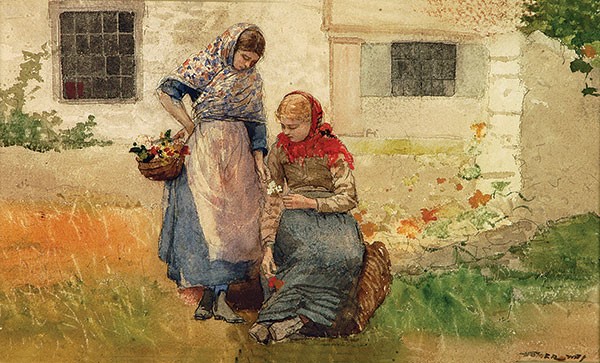 AN AMERICAN ODYSSEY: THE WARNER COLLECTION OF AMERICAN PAINTING

You say it for the first painting out of surprise, and for the second one out of visceral recognition.

The two works hang at the entrance to An American Odyssey: The Warner Collection of American Painting, a touring show organized by the Warner Foundation and now at the Frick Art & Historical Center. Fifty works from the 19th and early 20th centuries are on display as highlights from a collection of American art based in Tuscaloosa, Ala. From the outset, and throughout, the show gives us American artists and subjects, while establishing a program of affirmation and rethinking intertwined.

Daniel Huntington's circa-1840 portrait of Washington and Christopher Gist crossing the Allegheny is a medium-sized oil on canvas work that places the young British officer and his guide on a makeshift raft in transit. The history lesson about their failed attempt to eject the French from British-claimed territory in 1753 is familiar, but has never been iconic in the way that this artist seems to desire.

Maybe Huntington would have been more successful if Washington's body were choreographed with a less-stiff relationship with Gist's and a more precise conjunction with his own head. The lack of notoriety of Huntington's work comes from the un-mythical tale of a small military failure, but the compositional irregularities don't help.

But if this show's valuation of artistic quality is in question, just look at the adjacent Gilbert Stuart portrait of Washington, a miniature watercolor on ivory. The image is familiar from every elementary school hallway in the country, but this particularly gauzy and Olympian version comes straight from the artist's hand, and the Father of Our Country's gravitas seems freshly earned, even though the artist was producing these works with brisk consistency long after the first one.

So are we a nation of feckless hinterland incompetents, or one of steel-eyed republican patriarchs? Clearly, each is more meaningful with some acknowledgement of the other. We are invariably more compelling in a state of being incomplete, unresolved or oddly out of bounds, none of which is perceptible without some version of the ideal in mind.

Just look at Frederic Edwin Church's "Moses Viewing the Promised Land" (1846). Church places Moses on a rocky promontory before a compellingly verdant landscape at a yearning sunset. Only 20 years old at the time of painting, Church had considerable skills in rendering light and landscape, but not yet his full mastery of the roiling, polychromed cloudscapes of his later works, which are usually much larger and also lacking specific biblical references. America itself, he would realize, is holy enough. We know that Church himself made it to the Promised Land of accomplishment and notoriety. But his rumination as a young man on the failure to do so here is poignant, a singular and nuanced reward in what might previously have been construed as a lesser work by the artist.

Indeed, the gnawing question of greater and lesser works persists throughout this exhibit, posited but never answered definitively. For example, we get a series of delicate and masterful child or mother-and-child portraits from Mary Cassatt in drypoint and aquatint, each barely 8-by-6-inches, all produced in 1923. Cassatt distinguished herself as an artist on her own terms (not simply as a Degas protégé) in both the Paris Salon and the Impressionist exhibitions in the 1860s and '70s. But by 1923, the woman who was once at the cutting edge of Western art had sat still for a few rapid revolutions in painting, and was, like numerous colleagues, resting on her laurels. Works of this size and period, while showing her skills, hardly indicate what her achievements meant in their crowning moments and continuing legacy.

The arc of art history is toward the encyclopedic and inclusive. So no apologies are necessary for works that are smaller, earlier or lesser known than those in museums down the street or the turnpike. Indeed, this show has some real successes in demonstrating that such works can be at least as provocative as their more iconic partners, and elicit substantive interactions in juxtaposition with them.

The arc of art history has also trended toward reassessment of icons and thoughtful examination of lesser figures, which this show does to good effect. That same arc has trended, moreover, toward more thoughtful and critical assessments of race, class and gender, which this exhibition seems to shy away from – apparently not because of the capable installation here but more due to the values of the Tuscaloosa-based collection. Plenty more rethinking is due in order to fulfill both the initial promise of this show and the initial promise of American itself, for which more justice is always the ideal.