At Pittsburgh Center for the Arts, installations by Keith Lemley and Meghan Olsen play off one another 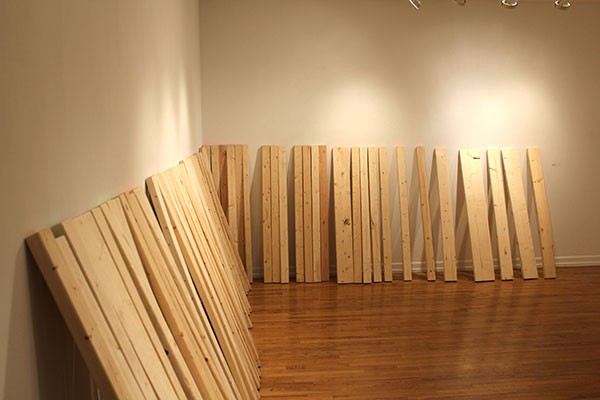 PAST PRESENCE and A MIND OF WINTER

Past Presence, by Keith Lemley, and A Mind of Winter, by Meghan Olsen, are two autonomous installations, each artist working individually on his or her own project. But exhibited side-by-side at Pittsburgh Center for the Arts, the synchronicity in the artists' materials and philosophies allows each work to boost the others' impact.

Both Lemley and Olsen work with wood and light. Lemley begins with rough, raw cedar and hemlock, root systems gathered from trees uprooted from the Appalachian woods where he lives and works. Following the roots' growth, he envisions further maturation, connecting white neon to imagine the course of development. The light he uses to suggest the trees' continuance is blindingly bright, initially jarring; at first, it seems an affront, parasitical upon its host. But quickly, the manufactured settles into the organic, and evolves from an assault upon the natural world into an enhancement of it.

Olsen's utilization of the same primary elements takes them on an utterly different path. Lumber is stacked against the gallery wall, 2-by-4s of varying lengths, their upward ends festively painted. On other walls, cardboard has been mounted several inches out rather than flush, its inner side similarly colored. Underneath the ordinary lighting of the gallery, the tints bounce against the plain, flat white of the walls. The eye is tricked, perceiving additional luminosity that is really only the reflection of the coated surfaces. We're also fooled by the lush quality of the hues into bestowing movement and vibration.

Both artists play with natural forms. Illumination is prominent in each installation. In one room or the other, botanical elements are incorporated that either mimic their pure state, or display in their shape the results of human interference. But despite their sharing of so many components, both tangible and intellectual, the outcomes of each process are wildly divergent. Seeing one next to the other gives the viewer another level of engagement, adding a layer of comparison and that wouldn't necessarily exist without the juxtaposition.

These separate exhibitions are not parts of a whole, so nothing can be said about their sum. But their ability to complement one another within their contrast does add up to something great.