Fiona Amundsen’s Like a Body Without Skin explores historical echoes

As Pittsburgh continues to rack up accolades for “livability” and its food scene from sources such as The Economist and Travel+Leisure, there remains a distinct fascination with its past. Both insiders and outsiders revel in its history, and artists, in particular, continue to mine that past.

Like a Body Without Skin, an exhibition of work by Fiona Amundsen at Neu Kirche Contemporary Art, takes its title from a description of a blast furnace by German conceptual photographers Bernd and Hilla Becher.

As the only non-working blast furnaces left standing in the area, Swissvale’s Carrie Furnaces have garnered considerable attention from artists. Amundsen, an artist from New Zealand who last year received Neu Kirche’s BACH PGH residency, uses photographs and video taken at the historic site mixed with archival images to explore “ideologically driven narratives” and the way remnants “might operate as a form of memorial.” 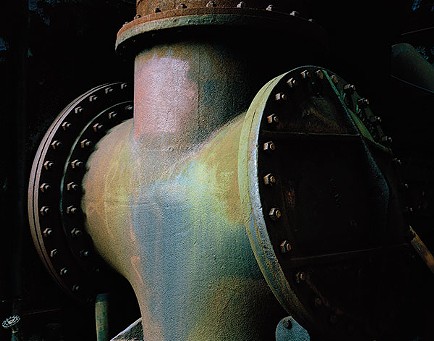 With a background in social anthropology, Amundsen is interested in sociopolitical perspectives, sites of trauma and the role of memorials, particularly those related to World War II’s Asia-Pacific theater. Her small exhibition includes the two-channel video “To Each Other,” which combines footage of steel plants/industry with an audio recording of a woman describing her experiences as a child during the bombing of Tokyo. Having been sent to the countryside for her safety, she was reunited with her brother, who arrived badly burned, the family’s only other survivor. A comparison is made between the blast furnace with its “insides … visible from the outside” and human bodies exposed to incendiaries.

Five large photographs taken at the blast furnace and four smaller photographs that reproduce pages from US Steel Magazine complete the narrative. In one vintage image, a large molten V surrounded by airplanes, ships, tanks and jeeps is underscored by the phrase “production for victory.”

Amundsen makes understated connections between industry in the U.S. and bodies from a region of the world that includes New Zealand. An interesting comparison could be made to the work of an artist much closer to home, LaToya Ruby Frazier, whose very personal account of the intersection of the steel industry, the environment and the impact on bodies plays out in her community just down the road, in Braddock.  Two perspectives from opposite sides of the globe, yet the narratives are similarly evocative.