At local conference, concern about the rise of GMOs 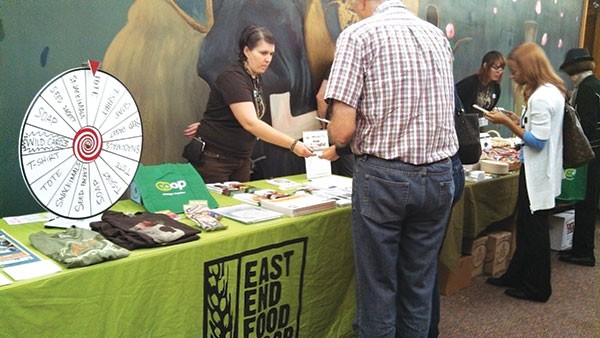 Photo by Jessica Server
Pittsburghers getting educated about GMOs

By now, you probably know what the words "organic" and "locavore" mean. The East End Food Co-op wants this year's buzzword to be "GMO" — the acronym for genetically modified organism.

GMOs, such as Monsanto's "Roundup Ready" crops, are born when genes from one species are inserted into another to obtain a desired characteristic. Currently, 64 nations require GMOs to be labeled. The United States does not.

"It's flabbergasting how that's possible," says Heather Hackett, the co-op's marketing and member-services manager. In an effort to help inform American consumers, she organized "Know Your GMOs" at Chatham University on Oct. 12.

Pittsburgher Kyle Pattison attended, drawn by headliner Jeffrey Smith, from the Institute for Responsible Technology. One of the leading consumer advocates for non-GMO food, Smith asked audience members for their experiences removing GMO foods from their diets. "I had terrible allergies," Pattison told Smith, "and they're just gone now."

Smith posited that GMO crops — which include most soy, cotton, canola, sugar beets, corn and alfalfa — negatively impact human health. Smith noted evidence to suggest a possible effect on conditions including autism, cancer, obesity — basically everything from acne to Alzheimer's.

"In their quieter moments," Smith joked, "Monsanto thinks, ‘What would Darth Vader do?"

GMO makers deny those claims. Monsanto, for example, maintains that the products can have environmental benefits, including a reduced need for pesticides — an upside the company notes is "recognized by consumers and environmentalists."

Between speakers, guests received product samples and tools such as a shopping guide for avoiding GMO products. They also had an opportunity to speak with event partners such as Chatham's Food Studies Program and Burgh Bees.

Ultimately, organizers say, the best thing consumers can do is learn about their food. Smith noted that last year, the "non-GMO" label brought the most sales growth of any health/wellness claim. The "tipping point," he said, would be reached "any day now."