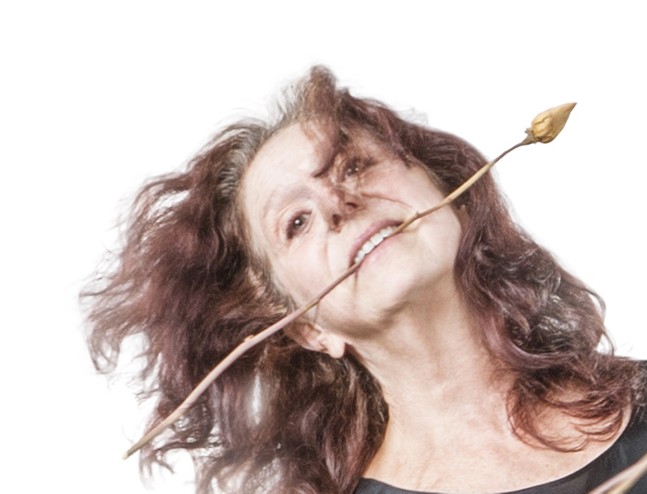 Photo: Frank Walsh
Beth Corning
Everybody is dealing with COVID-19 quarantines and restrictions in different ways, so Pittsburgh City Paper is reaching out to artists, activists, workers, and makers to see how they're doing.

Today, it's Beth Corning, dancer, choreographer, and director of Corningworks.

What has your day-to-day routine been like in quarantine?
I think my only answer is floating. I am still pretty disoriented by it. I have set up a kind of schedule for myself. I'm used to being in a studio with people working, I'm used to having a major production that I would be working on. Slowing down has been a daily process to process.

I do a ballet barre five times a week, just a video one from the Dutch National Ballet. And I take a shower.

Have you been able to do any of the activities you would do in a normal summer?
No. Not one. Well, I guess gardening. But usually, we travel. The company was supposed to be opening a major festival in Athens, Greece. We were invited to do a work that was going to be in June, and we had all this travel planned afterwards. And then, by now, I would be headlong into our fall production, which would be opening in October. And that ain't happening.

Your show The Tipping Point, which incorporated a Doctors Without Borders exhibit, was supposed to premiere in March, but had to be canceled. Do you have tentative plans to stage it in the future?
Oh, absolutely. I worked two years on that. That was a major production. Probably one of the biggest productions I've done in my 40-year career, on many levels. Collaborating with Doctors Without Borders was huge — you don't just walk into a major organization like that and go, “You know that installation you did? Can I have that?”

The responsibility was huge on many many, many levels. It was a very powerful work involving a huge group of people really coming from diverse artistic backgrounds and communities. From the refugee community to actors, ranging from 17 to 70. A very unique creative team working together. So yeah, that's gonna be performed come hell or high water. Maybe both. Hell and high water.

This was a very intimate work, a very intimately-sized work. It's part immersion, part performative. So we're trying to figure out a way to do this. We were naive at the time in March that we would close it [and] that we would do it in September. We have now scheduled to rebuild it and remount it in March. A lot can happen between now and March. It will get done. We have it all planned out in terms of all the different ways we can make this safe to do. But the reality is, I have 15 dancers and actors working in pretty close proximity to each other. The audience we can separate, the audience we can take down to five people if we have to. But I'm not about to do this as a piece of Zoom theater.

I was gonna say this doesn't sound like something that could be just done virtually.
I don't think any good art can be done virtually just like that. Film work is a whole 'nother artistic genre. It takes years of practice, it takes years of education to film dance, to film theater. Theater's a little bit easier because we, as an audience, are used to seeing people stand still and talk, but not dance. And not the visceral experience of theater, really.

The arts have lasted 2,500 years, through collapse of civilizations, through pandemics, through wars, through every imaginable stumbling block, and live performing arts has continued. It will continue. Now it's just a matter of using this time gainfully, mindfully, thoughtfully, and that's the hard part. I think we're all in a bit of shock with the COVID and the politics. It's been endless.

Back in March, you talked to my editor Lisa Cunningham about your frustration with "armchair liberals." Has your frustration grown amidst the pandemic and the Black Lives Matter protests?
I guess that remains to be seen, doesn't it? I'm thrilled to see the reactions of the world right now. The fact that the professional athletic community has reacted the way they did — it's about time. I think that people taking to the streets, it's about time. Why we're not all out there, I don't know. I think because we're scared of COVID and we are devastated and burned out.

What's a charity or organization you recommend donating to?
I'm a big supporter of the ACLU. They've been consistently protective of our rights in a very non-partisan way, leaning of course towards my sensibilities.

I am not in a position financially to donate so much, but I do make certain that I'm active politically, that I make calls, that I help neighbors, that we provide access to things to friends and support within our community. I think it's the ripple effect that goes out.

What TV/movies/music/dance etc. have you been consuming the past few months?
I really don't know what I've been doing. I do a lot of work for Corningworks in terms of administrative stuff. We're working on the projects that we're going to be presenting. I'm working with an actor/writer/director friend of mine, we're working on a project that will open in October. Not this October, but 2021.

So no, I haven't really done movies. I sort of pick up books and I read them. It's really been sort of a lost five months for me. I really feel like I'm sort of floating. I touch down and I look around and I do what I need to do and then I just seem to float some place. I'm watching a lot. I'm observing a lot. This colleague and I, we sort of write things to each other and connect twice a month to write what this project is.

Is there anything else you wanted to add?
If I had one wish, I wish that we had the insightful leadership — I mean period, of course — that would sort of say to everyone, "Here's what we're gonna do, and until we get a hold of this COVID situation, which we're all gonna have to work on.” … Until we can collectively work on getting this together, everybody should take a breath.

I watch my neighbors who are both parents working from home full time. Do you know what kind of hell that is? They don't have the support on any level to be able to pay attention to these young children who desperately need the attention.

More »
More At Home With ...
All Arts+Entertainment