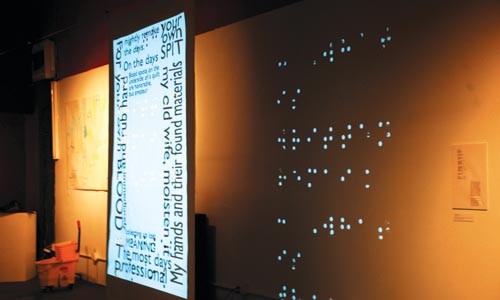 Kate Hansen
In touch: Prajna Parasher's "The Braille of Naming."

Most of us accept uncritically the impact information technology and virtual media have on our lives. E-mail and the Internet have become second nature. Scientific American Mind magazine claims hyperbolically that social-networking sites such as Facebook and MySpace are leading us into "the biggest social experiment in human history."

Leave it to a group of artists in Pittsburgh to explore the questions the rest of us should be asking about that experiment. Future Tenant, a gallery run by Carnegie Mellon University's graduate arts-management program, asked guest curator Kim Rullo to create an exhibit exploring the impact of technology on communication.

"I wanted to humanize the subject," she says. "I didn't want just a bunch of video-display terminals."

DØ.YOU.ND3RST@ND?: Communication and Technology as Art presents work by 20 artists, ranging from video installations to Marissa Miskanin and Kari Kramer's "communication technology dress," with wires hanging out the back.

In "TAG," by Andrew Halasz and Kristen Lauth Shaeffer, a sign near the gallery's entrance invites guests to send a text message to a cell-phone number. The return call plays a series of tones allowing visitors to decipher a Morse code message projected on the wall. Another installation, by Stewart A. Williams, projects successive line drawings of the artist's 169 "friends" based on the photos in their Facebook profiles.

The exhibit displays wit and humor. Sarah Wojdylak's installation of TV and computer components in a desk drawer includes a small terrarium at the center. A choreographed dance video by Jessica Kowal and Maddy Landi shows a very human man and woman communicating attention, attraction, flirtation, rejection and affection exclusively through body language -- frolicking in a state of nature before the advent of our technologically mediated existence.

Social-networking technology allows us to share intimate thoughts and actions with people we have never met, worldwide. It also feeds the yearning for fame and notoriety that monopolize our culture. Facebook and MySpace were designed to allow individual human beings to connect. Now they are becoming subverted to commercial ends. Perhaps today, Andy Warhol would seek his 15 minutes of fame on YouTube, and maintain contact with fans through Twitter.

What does it mean when our sense of self depends on being connected 24/7? What does "being connected" mean when we receive information at a pace that makes it difficult to comprehend events we can do little or nothing about?

A painting by Ed Piskor shows a small, grotesque figure, like something by Hieronymus Bosch escaped (or condemned) to the 21st century: An umbilical cord connects the figure to its Blackberry or iPod. A complementary piece by David and Laura Pinchot shows photographs of children speaking through tin cans and looking on, still maintaining their innocence.

At the exhibit's opening, on Jan. 15, crowds talked on cell phones, tweeted and greeted each other, in between viewing the work. But mostly what was evident was a sense of community among the artists and guests -- and not just the virtual kind.