“It takes time for the people to catch up and to appreciate and know what’s going on.” 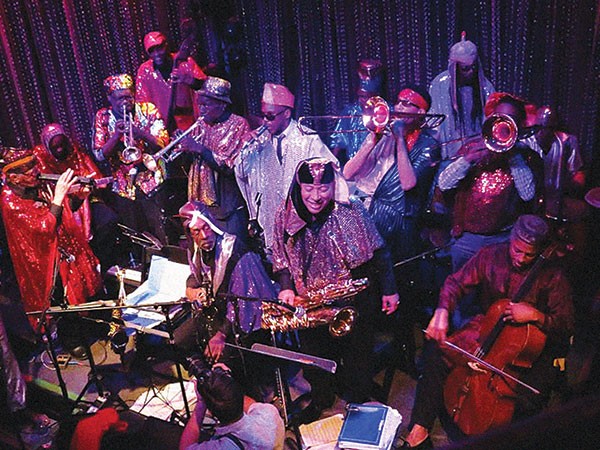 7 p.m. Sun., Sept. 18. New Hazlett Theater, 6 Allegheny Square East, North Side. $30. 412-322-0292
Maybe Sun Ra, the illustrious pianist, composer and band leader, did actually come to Earth from Saturn. Or maybe he was born Herman “Sonny” Blount and took on the new persona to forget his rough childhood in Birmingham, Ala. No matter which way he’s viewed, the musical philosophy of the man known as Sun Ra encompassed a perspective that was galactic in its scope. His Arkestra was well versed in the earliest, hottest version of swing, and its expertise continued into the realm of free jazz, while also touching on everything in between. Song titles like “Space Is the Place” and “Interplanetary Music” saw beyond this planet as well.

The iconoclast passed away in 1993, but the Sun Ra Arkestra continues, with the forward momentum that he expected from his group during his lifetime. Since he was looking, as early as the 1950s, toward outer space and life in the 21st century, it should come as no surprise that Ra’s status has only grown in the ensuing years. And it seems natural that one of his longstanding band members continues to carry the mantle. Still, one has to marvel that the keeper of the flame is 92 years old.

Alto saxophonist Marshall Allen answers the phone of his Philadelphia home enthusiastically, talking about the Arkestra’s show the night before in a park by the city’s harbor. A member of the Arkestra since 1957, this nonagenarian became its de facto leader in 1995, following the passing of tenor saxophonist John Gilmore. It’s a big responsibility, but judging by his animated tone, Allen wouldn’t want to be anywhere else. “I’m still hanging, trying to use this music to keep my body and mind cool, you know. They said it’s working pretty good,” he says, with a raspy laugh.

When Allen met Ra, the saxophonist’s biggest inspiration was Johnny Hodges, whose smooth, rich tone played a major role in Duke Ellington’s Orchestra. While Allen can still evoke Hodges, he is just as likely to produce some frenzied sounds more aligned with the free exploits of Anthony Braxton or the Art Ensemble of Chicago. Allen doesn’t see it as a radical departure, though. He developed that wild sound to fit his boss’ vision.

“Sun Ra came along with a different style and different meaning and different phrasing. So that’s what I had to learn,” he says. “Not that I couldn’t play — I couldn’t interpret the music like he wanted. So that took a little time to interpret how to play a tune, or his music. Any band is like that. If you go and sit in with Duke Ellington’s band, if you ain’t never heard it before, you couldn’t interpret it. When you rehearse with them, you get all these details — how to phrase the music.”

Rehearsals continue to be a big priority with the Arkestra. Allen holds them three times a week, frequently bringing in new members who will be ready for the times when the band can expand beyond its usual dozen members. (When playing near Philadelphia, the group can include as many as 15 to 20 musicians, including two pianists and several dancers.) Sun Ra left behind a large book of compositions, so it’s crucial that the band be ready for any surprises that wind up in the set on any given night.

Allen laughs as he recalls how Ra taught him a lesson in being prepared onstage. “Boy, he used to have us scrambling,” he says. “[Sometimes] Sun Ra was playing something, and I’d say, ‘What’s that?’ I had to thumb through the music [book] and try to find it. And he’d look over, and everybody’s bent over trying to find the music. By the time we’d find the music, he’d go into another tune! So I tell them guys to rehearse it and learn it by heart, because you ain’t got time to bend over for the music!”

Even though Ra’s music was actually more comprehensive in its scope than that of most jazz groups, he was viewed largely as an eccentric during his lifetime. But Allen believes that appreciation has grown for him and his music. “In the ’50s and ’60s, we did a lot of things, and he said, ‘With this music, they’ll understand what I’m talking about in the 21st century,’” Allen says. “I thought, ‘Damn, I gotta wait a long time … before they get to understand.’ Now they do. It’s like anything else: [For] everybody who’s a little ahead of time, it takes time for the people to catch up and to appreciate and know what’s going on.”

The Arkestra’s performances generally run through the previous century, paying tribute to band leaders like Fletcher Henderson and Duke Ellington, and digging into Ra’s own space music; all of it is accessible, says the saxophonist.

“All you got to do is listen,” Allen explains. “Everybody finds something in the music that they really like. But they also get what they need, too. So you’re happy when you get something you like, and something you don’t quite understand, but you need.”