At 78 and with myriad health issues, surf-rock legend Dick Dale plays through the pain

“I’ve been living like this for the past 15 years, but I’m still here and opening my eyes each morning.” 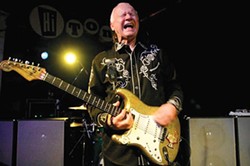 Playing through the pain: Dick Dale

By his own admission, Dick Dale is a mess.

The man hailed as the King of Surf Guitar has had rectal cancer twice. He’s currently in renal failure and refuses to go on dialysis, and he suffers from diabetes and from vertebrae that are so damaged “that every time I stand up it’s like a double-edge sword going into my spine.” During one bout with rectal cancer, part of his stomach and intestines were removed, and his bodily waste now empties through a stoma and into a plastic bag that he wears under his clothes.

At 78 years old and with this many health issues, Dale should be dead, or at the very least resting at home. But he’s not. When he spoke with CP by phone from his California ranch on July 16, he was making the final preparations for a three-month, 25-city tour stretching from Denver to Boston and back home.

“I can’t stop touring because I will die,” Dale says. And he’s not saying that as the long-time performer who can’t give up the spotlight and the intoxicating adoration of his fans. Rather, he emphasizes, “Physically and literally, I will die.”

He’s not kidding or overstating. Dale isn’t about to drive cross-country with his wife, Lana — herself in chronic pain due to multiple sclerosis — because he craves money to live high on the hog. He’s doing it to pay for medical patches and pouches so he can change his colostomy bag more frequently than insurance will allow.

“I have to raise $3,000 every month to pay for the medical supplies I need to stay alive, and that’s on top of the insurance that I pay for,” Dale explains. “The hospital says change your patch once a week. No! If you don’t change that patch two times a day, the fecal matter eats through your flesh and causes the nerves to rot and they turn black, and the pain is so excruciating that you can’t let anything touch it. That has happened to me because I was following the orders of the hospital.”

They’ve also told him it’s OK to wash out and reuse the bags, but Dale says that the bacteria has nearly killed him and he won’t risk it. Because despite the pain, he’s a man who still loves life and wants to keep on living it — even if that means taxing and stressing his body to the outer limits.

“Sure, I’d love to stay home and build ships in a bottle and spend time with my wife in Hawaii, but I have to perform to save my life,” he says. “I’ve been living like this for the past 15 years, but I’m still here and opening my eyes each morning.”

On this particular morning, Dale and I talked for a little more than 30 minutes, and in that time we didn’t really talk about his music. Not that we had to. Dick Dale’s place in music history is well documented and recognized.

He was born in Boston and learned to play the drums and guitar. In his late teens, he moved to Southern California, learned to surf and began to replicate the feeling and rhythm of surfing in his guitar-playing. His staccato picking style and use of reverb created what became known as the surf-rock sound. He also inspired and worked closely with Leo Fender to invent the first 100-watt amplifier because he played so loudly that he blew out every amp Fender had made to that point. This innovation is often credited as the birth of heavy metal. Dale enjoyed a career resurgence in the 1990s, when Quentin Tarantino used Dale’s classic song “Misirlou” to open the soundtrack of Pulp Fiction.

But we didn’t talk about any of that. We talked about what motivates a man to go up on stage, jump around and attempt to play just as hard at 78 as he did at 28. We talked about the rectal cancer he first got in 1968, and which reoccurred 20 years later; and about the fistulas, or leaky holes between his internal organs, that cause him even more problems. We also talked about the love of his life, Lana, who also struggles medically, and whom he credits with saving his life: “We’re just two sickies taking care of each other.”

We discussed the trials that he goes through when he performs. Like the time right before a show in Las Vegas a couple of years ago when his colostomy bag broke as he was preparing to take the stage. He and Lana had forgotten to bring extras because they left home quickly that morning.

“I had diarrhea coming all down my legs into my clothes and my pants, and my shirt. I’m supposed to be up on stage and I had to call Lana and go into the bathroom,” Dale explains with a laugh. “Lana washed my clothes out in the sink, I wrung them out and put them back on and did an hour-and-a-half show soaking wet, and then I signed autographs for five-and-a-half hours after.

“When I’m on stage, the pain can be excruciating. Someone has to help me up on stage because I can’t do it alone. There’s a part of my show where I play drums, and my drummer pulls my arm and my roadie pushes my butt to get up there. But I get up there.”

Dale shares stories like this because he wants people in similar situations to see what can be accomplished through sheer willpower.

“I’ll talk about it on stage,” he says. “I’ll tell them, ‘I don’t want to see anybody complaining about anything because I’m up here jumping around like a dummy.’”

And that’s Dale’s other motivation for performing. He wants to reach out to people dealing with health situations like his, or even worse than his. He wants people to come to his shows to see what he endures. That’s why he’s so candid.

“People come to my shows and they show me their scars. I’ve had paralyzed kids come in on gurneys because they want to see me, and I take time to talk with all of them,” he says. “I met a man who was sick and dying, and began talking with him on the phone. He said, ‘Dick, you’re my idol and I plan to outlive these hospice workers if I have to, but I will be at your show.’ And he was.

“I get that. Because I was told 20 years ago that I wouldn’t live much longer, but here I am. I believe our maker has kept Lana and I alive to give hope. We’re like Johnny Appleseed, crossing the country and sowing the seeds of survival.”

If there’s one thing Dale knows, besides making some of the most beautiful guitar sounds anyone has ever produced, it’s survival.

“When I go on stage, I’m in pain every night. But through the martial arts, I’ve learned to guide and deal with pain,” Dale says. “I play harder now than I ever have, and honestly when I go on stage I push a button. I swear at the pain. ‘Get out of my damn body; I’ve got to do a job!’”

With the pain he’s currently in, Dale says Lana wanted to cancel the current tour, but he refused. He must work. For the money yes, but also, he says, for the people who come to see him. He has told many reporters, including myself, that when he dies he wants it to be “on stage in an explosion of body parts.” That could happen. Dying doesn’t scare Dick Dale; what scares Dick Dale is not living the life he wants.

“You tell the people, ‘Don’t be scared of dying,’” he says. “When your mind leaves this body, it is a beautiful thing and it is not to be feared. Don’t let that fear of dying affect the way you live.

“You take that fear and you use it as a driving force to keep moving forward, no matter how much pain you have. That’s how I do what I do on stage. I’m not afraid to die because it all gets beautiful from here.”