At 75, Edgewood’s Verna Crichlow still rocks her steel drums and her Caribbean Vibes

“Other people, when you play, it lifts their spirits.”

If it’s noise, it’s the kind of noise that can’t help making the crowds smile. At 75, Crichlow hobbles a bit getting over to her instrument, sitting on its stand in her art-crowded Edgewood home.

But her Caribbean Vibes Steelband has hardly slowed down. It’s still playing Regent Square’s Run Around the Square and elsewhere, and it’s been featured through the years at everything from Bloomfield’s Columbus Day parade to a casket manufacturers’ convention in Erie. It even gigged at a bar mitzvah, for which Crichlow rehearsed an island version of “Hava Nagila.” 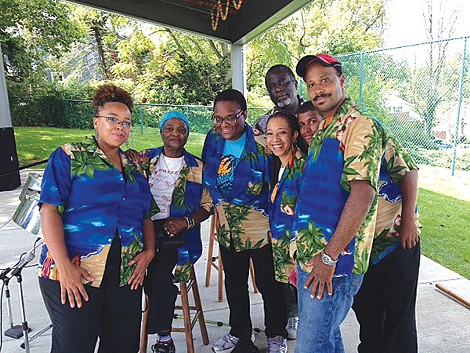 “But they didn’t even want it!” she says.

Crichlow came to America 50 years ago from Trinidad and Tobago, and raised her five kids mostly on her own. She retired as a math teacher from the Woodland Hills district in 2004 with multiple myeloma, now in remission.

“I taught myself to play the steel drum,” she says. In her native land, she remembers seeing “some wayward guys playing them. They were so bad that I couldn’t go near them. “

“But over the years,” she says, the instrument “became civilized. I play the drums to show the culture. And then people invite you to their celebrations. Then, too, it’s a service to others. Other people, when you play, it lifts their spirits.”

Her band now has four large bass steel drums, a set of regular drums, other percussion and a bass player. Crichlow and two others still play their steel drums as lead instruments. Her son, Rudyard, has graduated to his own band, Casplash. “I thought he would have stayed in Pittsburgh to take over,” she says. “But he went to New York. So I still have to keep playing.”

“She has a nice way of drafting people, of conscripting people,” Georgina says of her mother. “All of a sudden, you’re there.”

In her small house, the metal notes resonate as she strikes the pans — a chrome-plated oil drum. Some she hits only once, while others are struck repeatedly, to make a kind of vibrato. Each steel-drum pan has two circles of notes, with the higher notes inside. If they are pounded out of tune, they must be pounded back into tune, then tempered so the notes will hold.

She plays “Under the Boardwalk,” “Red, Red Wine” and “I Can’t Help Falling in Love With You.” The band’s CD, Jammin’ for 2000, features everything from the theme from St. Elmo’s Fire and Arrow’s “Hot Hot Hot” to “No Woman No Cry,” “La Bamba” and the traditional tune “Brown Girl in the Ring.” She still has a quick, smooth hand with her sticks.

Crichlow is right — steel-drum music can’t help but lift the spirits. What about those of us who love a sad song? Is there no melancholy in this thing?

She laughs. She says she knows some hymns. She plays “His Eyes Is on the Sparrow” and “Rivers of Babylon.” They’re in a minor key, sure, but they aren’t exactly Celtic.

It’s been a while since Crichlow DJ’d her Caribbean Rhythms show on WYEP. She still volunteers for Hillman Cancer Center and raises money for Haiti and other global causes.

“I haven’t mastered the art of improvising yet,” she says, her hands moving through another cheerful tune. Listening to Crichlow’s music still going strong, you have the feeling she’s going to get to it someday, but it won’t really change a thing.