At 101, Ernest Hemingway's friend and biographer finishes his adaptation of The Old Man and the Sea | Theater | Pittsburgh | Pittsburgh City Paper

At 101, Ernest Hemingway's friend and biographer finishes his adaptation of The Old Man and the Sea

The play had its world premiere at Pittsburgh Playhouse on Feb. 1 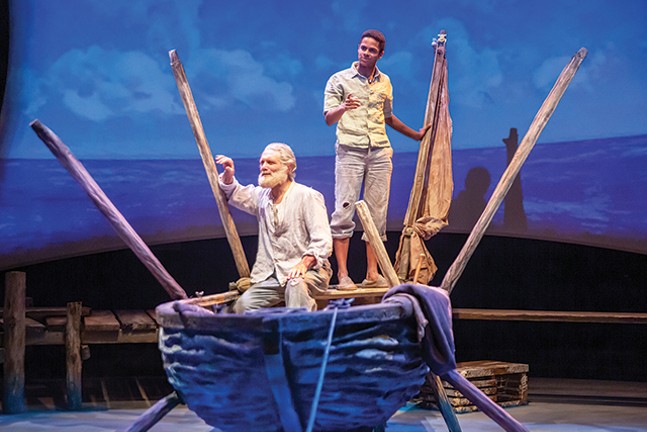 Sixty years ago, Ernest Hemingway walked out of the film adaptation of his book The Old Man and The Sea. The story goes that Hemingway went to the movie with his friend and biographer A.E. Hotchner, hated what he saw, and asked his friend to write a better adaptation for the stage. Now at the age of 101, Hotchner, along with his son Tim, have finalized the adaptation.

On Feb. 1, the script finally came to life as the play had its world premiere at the Highmark Theater at Pittsburgh Playhouse.

Pittsburgh City Paper spoke with director Ronald Allan-Lindblom to learn about the challenges and creative choices behind the production. The interview has been lightly edited for clarity and length.

How long has this production been in the works?

This has been a really quick [turnaround]. Our first reading of the script was on Nov. 2, believe it or not. This thing came together really quickly. It was the middle of December before we had our whole cast.

What were the biggest challenges to the production and what was your priority in addressing them?

I knew I wanted to tell this story using multimedia. Tim Hotchner and I, we wanted to make this a visceral experience, not just recite Hemingway. Much like the two films that have been made, there's third-person narration basically telling people what they're seeing. What we wanted to do was to try to see if we could make — since Hemingway is a character in this — if we could make the audience have a visceral experience with the play, rather than an intellectual one.

Can you tell me more about the use of video?

The whole thing is set to video. The set is a semi-circle dock with a suspended skiff above it; then the background is nothing but these three gigantic sails which are kind of shaped as an abstract shape of a marlin. That's how we create the environment, from Havana to Santiago’s dreams to the literal [scenes] on the ocean. I tried to make this as beautiful as it is poetic.

What does Anthony Crivello bring to the lead role?

[Crivello] is physically a lot like the description of Santiago in the book. [Crivello’s] a brilliant actor, he's a Broadway veteran, tons of credits, Tony Award-winner. That doesn’t go unnoticed. He throws himself into this role. It's been a terrific collaboration with all the actors, and Simon — he's in the band Cello Fury — he did all the compositions and performs in this. Between him and Tony, it really sets the tone of the piece.

What surprised you in this process?

Working with A.E. Hotchner. He's 101 years old. He was born in 1917. He is remarkable. To hear his stories about Hemingway — he was handed the handwritten draft by Hemingway, like "Here, what do you think of this?" — and so to have that kind of resource and source material has been really remarkable.