Astrology Now isn’t the same band it was in 2018 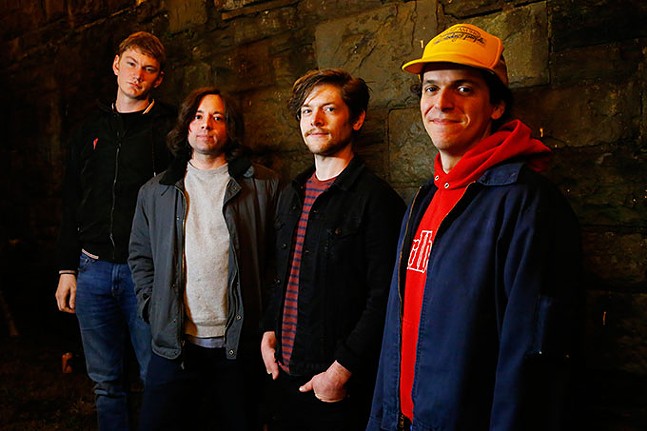 Since the release of psychedelic rock band Astrology Now’s debut album, Semi-Hollow Review, there have been some significant changes. Most notably, the act went from a one-man project to a full group. And that’s what the band’s founder, Greg Mastrean, hopes listeners take note of in Astrology Now’s latest drop, Knife EP, which the group will celebrate with a release party Fri., Jan. 10 at Spirit.

“I want people to hear the change from the songs I was doing by myself to what we have grown into,” says Mastrean. “It’s more exciting that way.”

For Semi-Hollow Review, which came out in March 2018, Mastrean wrote each song on the 10-track release, played every instrument, and recorded the album himself on an 8-track cassette recorder. He then went to Mr. Smalls Studios for mixing and mastering. That’s where Mastrean met Nate Campisi.

Campisi works at the Millvale recording and mastering studio as an audio engineer and has been involved in a number of Pittsburgh musical projects over the years, such as Soft Gondola and Jiant Eagle. As a local artist in Pittsburgh, there’s a high probability of working with Campisi at some point, or working with someone whose music has come across his soundboard at Mr. Smalls Studios. Campisi asked Mastrean what he planned to do with the songs once they were complete.

“I planned on just releasing them digitally and on cassette,” says Mastrean. “And I wanted to see if I could join someone else’s band. [Campisi’s] worked with so many people. He was like, 'If you want this to be your band and have other people play, people would be into it.' [So Campisi] helped put it together.”

Through Campisi’s contacts, Astrology Now filled out its lineup with Zach Bronder (Bat Zuppel, Flower Crown) and Matt Turcsanyi (Keen Genie) on guitar and vocals, Gordy Brash (Bat Zuppel) on drums (Evan Meindl of Rave Ami has since taken over as drummer; Jan. 10 will be his first live show with the band), and Campisi on bass.

“I’m not a bass player per say, but if a song would need bass on it, I would spend an entire weekend playing bass for one song,” says Mastrean. “[Whereas Campisi], who is really, really good at playing bass, he can figure that stuff out quickly. … I’m super happy all these guys are willing to play on it. It sounds a lot more polished now, just a little rough around the edges. It sounds more like a real band, where before it sounded like me alone in my bedroom, which is basically what it [was].”

Adding bandmates streamlined Mastrean’s process and allowed him to focus more on song arrangements. (Everything is also recorded digitally now, as opposed to on tape.) Since each Astrology Now member is also in another Pittsburgh project, it gave the band a step up in promotion and marketing.

“If I would have started initially with myself and a few other [new] people, it would have been harder to get shows booked and get the name out,” says Mastrean. “It’s been a net positive because they know so many people, and they will come to see the guys or hang out with them even if they don’t know me or the band.”

While Mastrean still does most of the songwriting, Knife EP was created with input from all of Astrology Now.

“I’m concentrating more on getting the songs arranged, getting the bones of it together, then I bring it to the rest of the band, and we flesh it out and turn it into something probably a lot better than I can do by myself,” he says.

In the swirling title track, “Knife,” the first song Astrology Now did as a group, there’s a point when Bronder has a spoken-word verse. “The knife is never sharp enough,” he spurts, “This human form is dull, boring / I’ve grown old, sick, tired of myself …”

When Bronder first suggested it, the rest of the group was hesitant, but let him go ahead and try it out anyway.

“Then we were like, ‘Holy cow, where did that come from?'” says Mastrean. “It’s great when you can bring an idea and other talented people around you can take it to the next level.”