Motifs include an agreeably (pre)historic concern with animals and nature

continues through Aug. 15. Carnegie Museum of Art, 4400 Forbes Ave., Oakland. 412-622-3131 or cmoa.org
The Associated Artists of Pittsburgh’s 105th Annual Exhibition, featuring 63 works by 56 artists, is a solid show. And while the exhibit doesn’t break a ton of new ground, it’s good to have it back at the Carnegie Museum of Art, its spiritual home.

In her juror’s statement, Sarah Lehrer-Graiwer acknowledges that this Annual isn’t a survey of the AAP’s membership, but rather a “small selection” from among some 650 submissions by regional artists.

Still, some motifs emerge, namely an agreeably (pre)historic concern with animals and nature. Admittedly, a few of these creatures seem products of the GMO age: Susan Kemenyffy’s porcelain work “Waiting” — part of one animal-themed grouping — depicts a hybrid of leopard head, bearish body and insect legs. And the title of Ben Matthews’ nearby ink drawing “Gene Assassin” suggests a lab-induced function for its winged, eyeless little monster. In “Portal — Mossy,” Atticus Adams cleverly works green aluminum mesh into a mutant wreath that look like it might eat you.

Also unnatural are the nightmarish cartoons of Andrew Allison’s “Pool” — hundreds of imaginary sea creatures, no two alike, displayed on the floor on what could be a novelty bedsheet for your favorite weird nephew. And while Ed Parrish’s “Sublime Neuron” might be organically inspired, this work in hand-painted cast iron (a rare artist’s medium) is at once fearsome and whimsical, like a Mongol warshield crossed with a doily.

Meanwhile, Bob Ziller’s “William Blake” is a charming portrait of the visionary poet as an old sheep, though it feels less like science fiction and more like the Paleolithic practice of blending shamans with animals. Close by is Carole Stemple’s “I Got All My Sisters in Me”; this standout work is a ceramic woman, seated crosslegged and split in half to reveal miniatures of iconic female forms, like the Willendorf Venus, and hand-drawn tableaux referencing cave paintings — a powerful evocation of sorority across millennia.

“Everything All At Once,” by Clayton Merrell
Nature is sublimely summoned in Clayton Merrell’s oil painting “Everything All At Once”: a line of pinwheeling celestial bodies separating two dusky, near-mirror-image forest landscapes. Jennifer Nagle Myers asks us to find ourselves in nature with “Waterfall Vision”: Its 84 slate panels cascade in two streams down the Scaife Galleries wall and onto the floor, adorned with painted forms suggesting roots or ribcages (or both). Judi Rosen’s “I Know You Are But What Am I?” also toys with organic forms: a witty mashup of a walnut, a stone, flippers, sex parts and other concupiscently curved shapes immortalized in bronze. Sharon Massey’s “Precious” asks that we reconsider value judgments by rendering a large diamond in the dull hues of galvanized steel. And Don Dugal’s large painting/drawing “Twitter Over Fracking” expresses anxiety over nature’s prospects with two similar cubes: The upper is colorful and criss-crossed with “trending” line graphs, while the lower, shale-gray, is riven by a single lightning-bolt-shaped crack. It’s like an emotional info-graphic.
Domestic concerns get their due. For “Hand-Typed Checked Shirt,” Lenka Clayton continues her exploration of maternal devotion by disassembling a child’s dress shirt, carefully patterning it with 30,000 strokes of a typewriter’s “=” key, then hand-sewing it back together. Pati Beachley’s “16 Yarns: We Never Even Talk Any More” will induce a knowing chuckle: It spells out its title in cursive, in sparkly chromed yarn. (Imagine it hung in the kitchen.) “Fairground #8” is another of the inimitable Ryder Henry’s urban landscapes reimagining home in oil, here a neighborhood of miniature farms and 13-story moated (!) high-rises, the gravel streets traversed by bikes and cars. 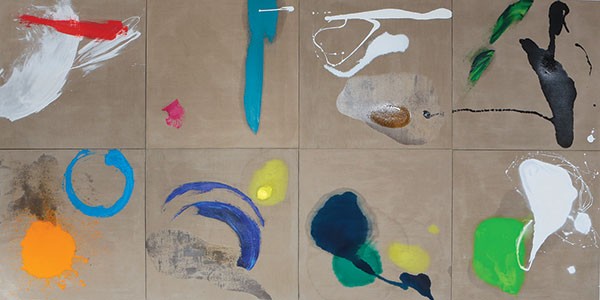 “Floor (Detail),” by Mia Tarducci
Notable abstract work includes Mia Tarducci’s “Floor (Detail),” a painting on eight 3-foot-square panels that concisely plays a few near-geometric elements against other shapes that rhyme across the canvas in splashes of bold, bright colors on the tan linen. Curtis Reaves’ two “Intradialogue” pieces look like graphic illustrations but they’re actually clever assemblages incorporating what look like hair rollers, in hues of DayGlo and metal.

In recent years, under executive director Juliana Morris, AAP has done a good job bringing in new and younger artists: At least 11 of the Annual’s 56 participants were born in 1980 or after, and a similar number in the 1970s. (Ten or so were born before 1950.) Yet if the exhibit is oddly devoid of more contemporary media — there’s zero video, zero sound art — one can note that absence without feeling deprived.

“Twitter Over Fracking,” by Don Dugal
The Annual, after all, does showcase a few newfangled techniques, as in Carolyn Frischling’s “Appstraction”: The 3-D-printed sculpture in PLA plastic with a polymer ceramic coating suggests a microorganism by way of Henry Moore. Nor have more venerable formats lost the power to move us: Exhibit highlights include David Stanger’s still life in oil “Pillow,” with the depression in the cushion where a head once lay as haunting as the head-shaped shadow cast over it.