What distinguishes Korean cuisine from that of its East Asian neighbors, we think, is its rustic boldness. Whether it's fiery, fermented kimchi, beefy bulgogi or the conglomeration of meat, rice and veggies that is bibimbap, Korean cuisine doesn't rely on fussy techniques. Not that Korean cooking isn't an art. But it's one whose strong, straightforward character we find uniquely satisfying.

On the West Coast, this assertiveness has been transposed into a variety of fusion specialties, most conspicuously Korean tacos, whose popularity has spread primarily via food trucks. (This vector of innovative cooking is all too scarce in Pittsburgh.) Last summer, a friend from Los Angeles regaled us with descriptions of her favorite Korean taco vendors there, and we could only salivate. Last week, we sampled some for ourselves at Aseoma in Squirrel Hill.

And since Aseoma is a full-fledged restaurant, Korean tacos were not all we had. Aseoma has extended its fusion efforts in several directions. For instance, it offers wings and sliders that, like the tacos, are made with distinctively Korean components. Rounding out the menu are some more authentically Asian street foods, such as dumplings and seafood cakes, and a selection of noodle- and rice-based entrees in a variety of Asian styles, from Chinese stir-fries to Thai-inspired curries. 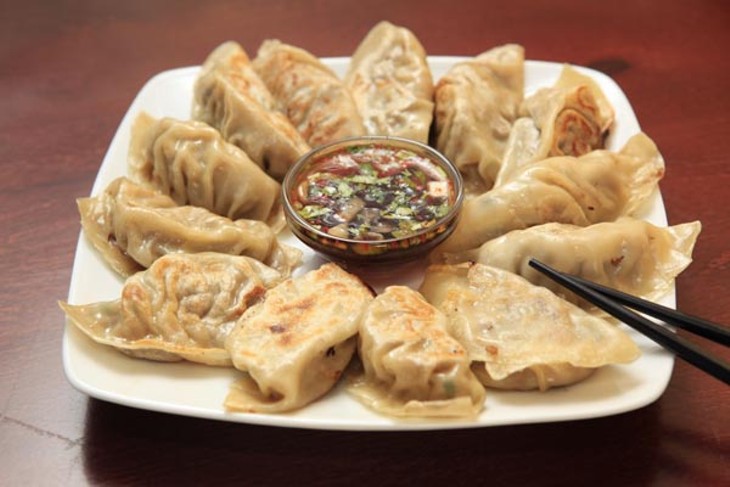 In lesser hands, such a pan-Asian approach could veer uncomfortably close to feeling like a food court, meekly replicating the greatest hits of several cultures' complex cuisines. But the dishes we tried were respectable versions, and Aseoma appeared unafraid to impart its own interpretations.

Pad Thai, for instance, had most of the hallmarks of the Thai classic: noodles not so much sauced as flavored; vegetables included sparingly to add texture as well as flavor; succulent shrimp (and, in this version, chicken, too) for substance; and crunchy peanuts adding earthy notes to it all. The whole was well balanced and, to our palates, successful.

Black-bean noodles, while originating in a traditional Chinese dish, also gave a nod to the Central American traditions inflecting other parts of Aseoma's menu. In this version, chewy whole-wheat noodles were liberally coated with a thick, inky sauce, and intensely flavored with black beans and shredded pork. Vegetables, diced small and just cooked, were tender-firm. Their individual identities were cloaked by the deep, dark black-bean sauce, but we were pretty sure we detected potato, onion and something with a cabbage-like crunch. Grated carrot was the perfect garnish, imparting not just this root's trademark sweetness, but a pop of color to an otherwise monotone dish.

Traditional Asian street snacks are sprinkled throughout Aseoma's menu. We ordered fried taro root from the "appetizers" list and tod mun — seafood cakes — from the inexplicably separate selection of "starters." The taro had a not-unpleasant, eraser-like texture and a mild flavor that begged for a sauce with more personality than the sweet, orange one it was served with. The menu informed us that the tod mun included minced seafood, keffir lime leaves and long beans. That description led us to expect something along the lines of an ingredient-filled pancake, rather than the fried patties of uniform texture which arrived. Yet their briny, fresh flavor was superb, and their texture — moist within and crunchy without — was very satisfying.

When it came to the tacos, there were four fillings to choose from — vegetarian, pepper chicken, pork and "fire beef" — and a burrito option as well. Both the chicken and pork tacos were extremely successful, stuffed with tender, savory marinated meat and a judicious mixture of traditional Mexican fillings (cheese, pico de gallo) as well as Korean ones (kimchee, pickles). Garlic sauce added moisture and extra zing to each taco; red-pepper sauce spiced up the chicken, while honey-pepper sauce added the traditional sweet counterpoint to the pork. Remarkably, in neither case was the meat overwhelmed by this abundance of assertively flavored ingredients.

The same could not be said of the burrito, in which Korean barbecue beef — flavorful marinated short ribs — ceded their central role to a fat stuffing of rice, as well as pickled and fresh vegetables. The beef really shone in the sliders, though. Formed into small but substantial patties and topped with an abbreviated selection of toppings in a sweet, soft roll, the meat's hearty flavor took center stage, where it was enhanced by piquant seasoning.

Aseoma is the rare restaurant that adds something truly new to local dining options. West Coasters have been appreciating this broadly interpreted fusion of Asian and American cuisines for some time, and we are fortunate that Aseoma has finally brought this exciting mix to Pittsburgh. While the selection of Korean tacos is still limited, it is part of an altogether worthy menu — one that presents pan-Asian cuisine in a distinctive, and appealing, way.