“Even if you’re not climbing, it’s still just a cool place to hang out.” 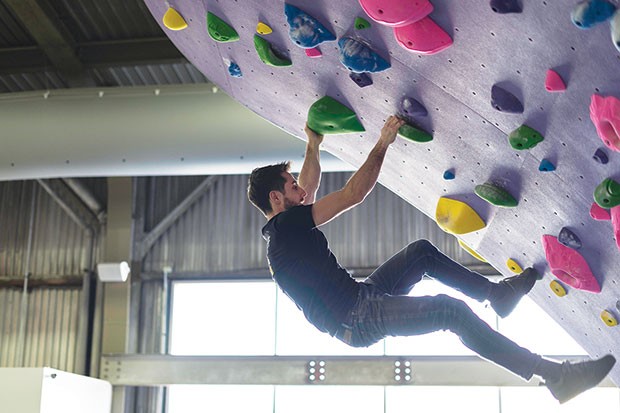 Like many climbers, Alex Bernstein vividly remembers when he first fell in love with the sport. Ten years ago, during a trip to San Francisco, he visited the Mission Cliffs climbing gym and quickly realized he wanted to bring a similar experience to Pittsburgh.

This month, that dream will become a reality when ASCEND, a climbing gym and yoga studio, opens in the South Side. ASCEND is the brainchild of Bernstein and co-owners Aaron Gilmore and Paul Guarino. The trio, who met through Pittsburgh’s climbing community, hope their space will serve as a hub for other climbers and the larger community.

“We want to be a community-driven, fitness-oriented, welcoming, safe place for everybody to come to have a good time and walk away with a smile on their face,” Bernstein says.

From the time you enter the space, it’s clear this is more than your average climbing gym. Unlike other facilities that have a more cavernous feel, ASCEND boasts panoramic windows with great views of the city. The facility offers both bouldering and top-rope stations across more than 10,000 square feet of walls ranging from 13- to 24-feet tall, with an estimated 7,000 rainbow-colored holds.

“Our goal was to design the place so a first-timer, no matter how fit or what age, can come here and have a full day’s worth of climbs to work on,” says Guarino. “We also hope to be a home for some of the most elite climbers in Pittsburgh. If it’s your first day, you could be on the same wall — climbing an easier route — right next to one of the strongest climbers in Pennsylvania. And that’s how you learn: from other climbers.”

ASCEND also features cardio equipment, free weights, kettle bells and other cross-training tools. There’s free Wi-Fi, locker rooms with showers, a kitchenette with coffee and pre-packaged foods, and even a child-watch space, complete with its own mini climbing wall.

“Maybe instead of putting in a six-hour day at a coffee shop, come here, get a cup of coffee, do a little work on your laptop and do some climbing,” says Gilmore. “Even if you’re not climbing, it’s still just a cool place to hang out.”

Day passes are $16 and include one yoga class. Equipment rentals are available. There are also two monthly memberships: $60 for unlimited climbing and fitness equipment and $100 for unlimited yoga.

“If you’re bored of just going to the gym and just lifting weights and doing reps,” says Guarino, “climbing is one of those things where you get a really full-body workout and you don’t even realize it.”