Asbestos at Schenley High may have been less prevalent than believed

The district "would not have been able to get Schenley closed had it not been for the asbestos," says Kathy Fine, who opposed the move. 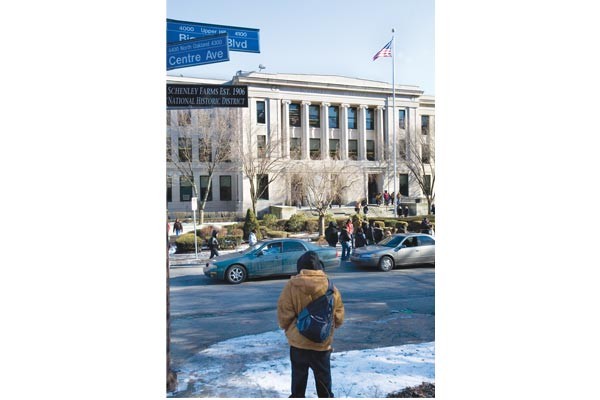 Back when Pittsburgh school administrators were preparing to close Schenley High School, they had one word for parents and students who wanted to keep it open:

The landmark Oakland building housed a diverse student body and popular programs, but by 2007 it was showing its 91 years. Plaster inside was deteriorating, and tests showed it contained asbestos — a mineral whose tiny fibers can cause cancer when inhaled. Citing a survey by AGX Inc., school officials sounded the alarm bell. In 2007, the Pittsburgh Post-Gazette quoted Chief Operations Officer Richard Fellers warning that asbestos "is in every wall, in every ceiling, on every floor." Then-superintendent Mark Roosevelt claimed refurbishing Schenley would cost at least $64 million, with asbestos removal a worrisome part of the bill.

Now, four years after the school closed, it seems the problem may not be as bad as originally thought.

"Our results showed all the [plaster] samples were less than 1 percent asbestos" by weight, says Dan Davis, a former senior project manager for L.R. Kimball, a consultant for the district. That 1 percent threshold is important, says Mark Banister, a certified industrial hygienist who has done consulting in the industry. Environmental regulations often exempt material containing less asbestos than that.

Davis, who left Kimball last year, says that in 2009 the firm took 300 plaster samples to prepare a report on Schenley for potential buyers. Asbestos made up between 0.25 percent and 0.5 percent of the plaster's contents — concentrations similar to those Kimball had found in routine testing in prior years.

Those concentrations were much lower than those reported after a 2002 test by AGX: The AGX survey found concentrations over 1 percent, with many as high as 6 percent.

School officials "were aware of" Kimball's lower numbers, Davis says. "I was part of the meetings. They knew this information before they closed the school."

Davis is quick to note that AGX "didn't do anything wrong." AGX had conducted an initial "bulk analysis," a standard approach which relies on visual estimates of a sample's make-up. Kimball's test was a more precise "point count" analysis, a survey often carried out after a bulk analysis if those first results show a level of 10 percent asbestos or less.

Yet in making the case for Schenley's closure, the school district relied solely on AGX's numbers — apparently without ordering a follow-up point-count.

Another consultant, the architecture firm Astorino, advised the district in 2006 that if "additional point-counting sampling is performed prior to asbestos abatement," it might reveal less material might need to be removed, and "a significant savings could be realized." But the report added that school officials chose not to order such a study, because they doubted asbestos levels would be below 1 percent.

It's unclear how lower numbers might have shaped the district's decision to close Schenley, if at all. Asbestos is covered by various government regulations, Banister says, and no matter what, "There would certainly be considerable expense involved" in protecting students and staff. Winkle, for one, doubts point-counting would have saved much money.

"Some people may feel that it's not important to know what [the level of asbestos] is," Winkle says. "What do you gain?"

Some who opposed shuttering Schenley wonder the same thing. Davis' claim, first made last month during an interview on Essential Public Radio, has angered some who fought to keep Schenley open.

Roosevelt "would not have been able to get Schenley closed had it not been for the asbestos," says Kathy Fine, co-founder of PURE Reform, a community group that opposed Schenley's closing.

School board member Bill Isler, who was board president when Schenley was closed, said he doesn't remember hearing of discrepancies in asbestos levels. "I think Kimball at the time validated the other report," Isler says.

In any case, he adds, closing Schenley "was not just about the asbestos. It was a series of issues."

The mystery has arisen as the school district and neighborhood groups are charting the vacant school's future. The Oakland Planning and Development Corporation will release a community survey on the school's reuse Aug. 1. But Fine says it may be time to revisit the decision to close the school in the first place.

The new data, she says "certainly reopens this for discussion."