The Public's delightful take on a Shakespeare classic 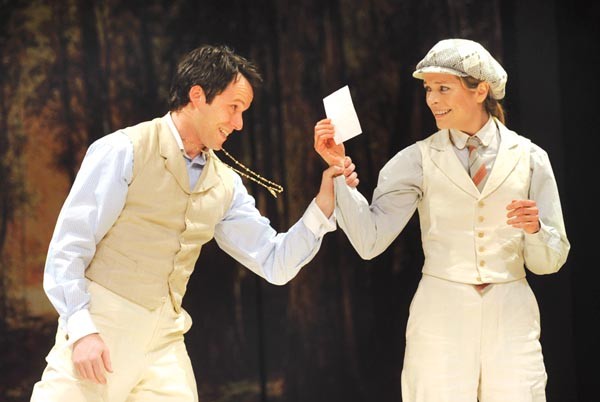 Pittsburgh Public Theater's Ted Pappas and a superb cast have come up with a vivacious, engaging, memorable version of Shakespeare's As You Like It. The performers make the words sparkle with thorough understanding and wit, and their interpretations of the characters brim with personality and style. The music by Michael Moricz sounds constantly charming and Gabriel Berry created splendid costumes.

Pappas has given this the feel of a time and place around 100 years ago. It works, serving the tale and the text to a T. He and Berry ingeniously illuminate the separation of darker characters and lighter ones, costuming ensembles in degrees of black or white, while Pappas expertly paces contrasting scenes — earnestly serious or sunny and bright —  with subtle directorial underscoring enriching everything.

Shakespeare wrote good, clear exposition in the first scenes. Later, when complications compound, Pappas and the actors make them equally easy to follow.

The play dwells on a budding romance under the branches of The Forest of Arden, between self-exiled Orlando and Rosalind, the daughter of usurped Duke Senior. Romping around them are off-duty shepherds, a shepherdess and a country wench, while Rosalind is accompanied by her in-court clown, Touchstone, and her cousin Celia. Duke Senior's entourage includes Jacques, whose ruminations mark him as forever melancholy.

Given 16 artists vivifying the space, there's no room here to cite all the worthy performances. In the center, Gretchen Egolf, as Rosalind, gives every speech and nuance wonderful meaning, and she convincingly plays Rosalind endeavoring to inhabit her boy-like disguise. Christian Conn's Orlando has constant truth, vigor and warmth. Carnegie Mellon grad Anderson Matthews makes each word by Jacques glow with meaning, magnificently enhancing the "All the world's a stage" monologue. Among the six other visiting actors, I found that Julia Coffey overplayed Celia's speeches and the clowning of Douglas Harmsen's Touchstone seemed rather tame.

Michael Moricz's musical settings of Shakespeare's lyrics, including a merry sing-along, sung with panache, add to the pleasures. But that should come as no surprise. They fit the whole conception. You'll like it.