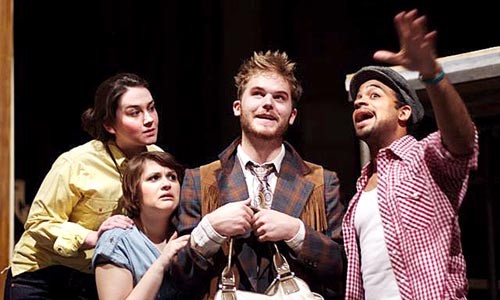 Moira Quigley, Julianne Avolio, Alex Stewart and Martel Manning in Pitt Rep's As You Like It.

The director's program notes for the University of Pittsburgh Repertory Theatre's production of As You Like It -- with its yearning for "simple times" -- filled me with dread. I am more than happy that the past has passed. The "good" old days? An oxymoron. Who really wants to go back before indoor plumbing? Or even before cell phones and email?

Fortunately, "nostalgia" is not seriously invoked here. Director Sam Turich pulls from many sources, from The Sopranos to some welcome Bollywood. His rustics are a cross of "Li'l Abner" and the musical Bat Boy, though Dylan Geringer literally leans toward the former as a Daisy Mae Yokum-like shepherdess. Yes, the past does creep in with a '60s flashback presenting the banished Duke Senior as an unrequited hippie (no wonder his brother kicked him out), though John Michnya is scarily and wonderfully rubbery in his portrayal.

As You Like It is the one about family betrayals, tangled love affairs and, of course, cross-dressing. Hmm. That describes most of Shakespeare's comedies. OK: This play is the only one that's mostly in a benign forest, gloriously realized in this production by Joe Gourley's set design, augmented by Amanda Kircher's lighting and Gala Lok's sound. It's gorgeous to watch: Ariel Nereson's choreography, Don Mangone's costumes, Michael Mueller's fight choreography, Dan Carr's production design, and the work by movement coach Kristi Good. The aural experience greatly benefits from original music composed and performed by undergrads Kyle Bogue and Kathryn Zoerb, both of whom also credibly and creditably act, as Duke Senior's buddies.

Ken Bolden as Jaques, the burr in the pastoral bubble, tops the evening with the "all the world's a stage" speech. Also notable are: Moira Quigley as the heroine Rosaline; Julianne Avolio in a more comic portrayal of cousin Celia; Jordan Walsh as the bumbling but sweet hero; Alex Stewart as the wise fool Touchstone; and Sarah Torocy as his foil, a charming naïf.

Shakespeare's lightweight comedy lends itself to many interpretations. Pitt mixes up a colorful, musical mishmash to enjoy.

As You Like It continues through Sun., April 10. Charity Randall Theatre, Stephen Foster Memorial, Forbes Avenue at Bigelow, Oakland. 412-624-7529 or www.play.pitt.edu