As You Like It at the Conservatory Theatre Co.

It's a likable rendition of a Shakespearean favorite 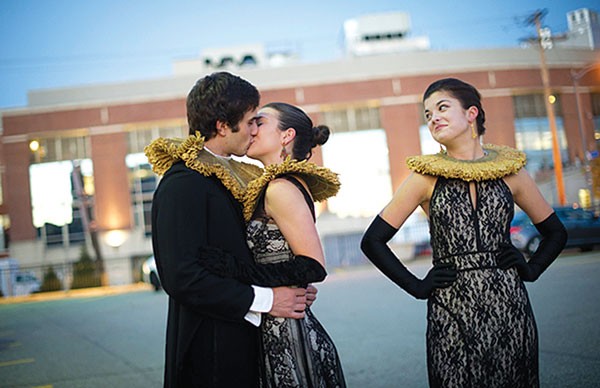 Photo courtesy of Jeff Swensen
From left: Mike Nicosia, Jennifer Arfsten and Hannah Morris in the Conservatory Theatre Co.'s As You Like It

Until walking onto the set of Point Park University Conservatory Theatre Co.'s production of As You Like It, I hadn't thought about Harry Nilsson's The Point for a good 40 years. But there was Nilsson's music playing, and the look of Lindsay Mayer's design of Shakespeare's Arden Forest brought the 1971 movie/album to mind.

Besides the aesthetic link, The Point had its hero banished into its own ("Pointless") forest, just like Duke Senior, et al., of AYLI. Oh, yes, and in the days since Nilsson was inspired by an acid trip to write his tale, the Downtown school has acquired a nickname: The Point.

I was having my own flashback, admiring the multi-print flower child-themed costumes of designer Michael Montgomery (I still have some of those crocheted vests in my attic) for the forest scenes. His court dress for the ladies is spectacular, though the men's are an underwhelming mix of 20th-century formals and Elizabethan ruffs.

It's tempting to extend that description to the performances, though not entirely fair. Director John Amplas has changed several key characters to women, thus ramping up the opportunities for the young actresses to shine. Torée Alexandre delivers vocally and physically as the new Mme. Jacques, but belies the character's claim of melancholy with a smile more cheer- than wistful. In several roles, including an unwilling singer, Katherine Rogers projects a wry charm.

But of course the star turn is Jennifer Arfsten's as Rosalind (a truly unlikeable heroine, if looked at dispassionately), both coquette and bully. No mere princess sidekick, Hannah Morris' Celia is a well-rounded character with a sense of humor. Among the rustics, Angela D'Occhio giggles a lot of personality into Audrey's few lines of dialogue. Dominique Brock makes a lively heartbreaker as Phoebe.

Mike Nicosia is dashing as the hero, Tal Kroser villainous as his brother, and Perris Drew channels Darth Vader as the evil ruler. The design team has outdone itself, notably Jessi Sedon-Essad for video. Mayer's whimsical set suggests trees with clumps of hanging wine bottles, reminiscent of too much Boone's Farm Apple that accompanied the music back in the day when flamboyance mattered more than taste.