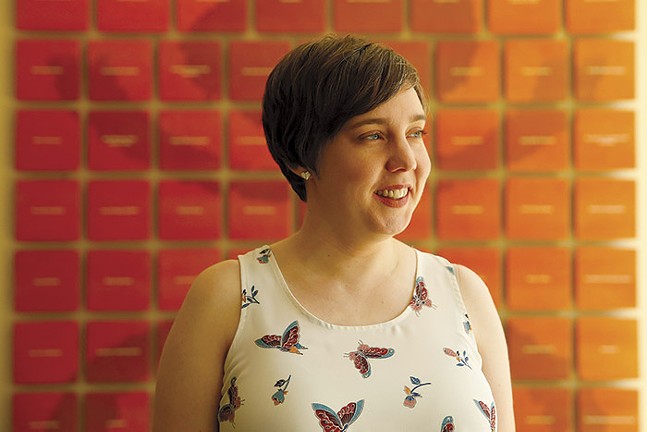 CP Photo: Jared Wickerham
Liz Felix inside WYEP’s studios on the South Side
Like many radio professionals, Liz Felix started out at her college station, in this case at the University of Illinois. She has bounced around different music stations in different cities throughout her career, but no position was like BirdNote.

“It was really fun,” laughs Felix as she explains BirdNote, a public radio program based out of Seattle that is quite literally about birds. “It was a completely different thing from what I'd been doing.”

Felix has since left bird radio behind, and is now the newly promoted program manager at Pittsburgh’s listener-supported adult alternative station 91.3 WYEP.

Her new role marks a sort-of refresh for WYEP and its sister Pittsburgh Community Broadcasting Corporation station, 90.5 WESA, both of which saw changes with station manager Mike Sauter recently taking over as vice president of broadcasting.

“I would say it's a new chapter, but maybe not for the reasons you would think,” says Felix, who came to Pittsburgh in 2019 to serve as a radio host at WYEP. “I think it's a new chapter because we're coming out of a really strange period of time. I don't think any of us could have foreseen the way that things were gonna go last year.”

Despite being over the airwaves as opposed to in-person, WYEP and WESA still suffered through the pandemic like anyone else. Felix says that, since late summer 2020, most of the employees have been working from home, with some on-air staff coming into the stations’ South Side offices.

Felix says they are now focusing on getting people into the building and transitioning back to producing shows on-site. Prior to the pandemic, around 60 people worked at the Community Broadcast Center during the week, with a varying number of volunteer DJs and hosts coming in over the weekend.

“We've really been working remotely for the last year and a half,” says Felix.

Generally, though, Felix says she wants to build excitement again for WYEP, a station with a 47-year history.

“It’s a heritage radio station,” says Felix. “It's been here for a long time. But I think there's still so much left for us to do. And there are people in Pittsburgh who don't know WYEP yet and I want to make sure that they find out about us.”

Sauter, like Felix, worked his way up at WYEP, starting as a program director in 2004 before becoming the station manager in 2019. He believes Felix will be instrumental in ushering WYEP into a new era.

“It’s very exciting to have someone as knowledgeable and talented as Liz to take over programming for WYEP,” says Sauter in a press release. “Although we are navigating a historically challenging time for media organizations, I am confident that Liz will be able to guide the station toward greater success in our efforts to serve music fans in Southwestern Pennsylvania with music discovery and to help make the Pittsburgh region’s music ecosystem stronger and more vibrant.”

While public radio often suffers from a reputation of being stuffy, with its soft-spoken hosts and preference for genres like smooth jazz or classical, Felix says that working at WYEP has been the opposite of that stereotype, instead playing a lot of independent and progressive music.

“It's not stuffy public radio, and I want to make sure people know that,” says Felix. “We're here to have fun. And we want our listeners to have fun, too.”

She adds that the station foresees a “really exciting period of time” now that live concerts are returning to the city. She looks forward to acts like the electronic duo Sylvan Esso, art rock group The Flaming Lips, and indie rocker Waxahatchee, all of which are scheduled to play at various Pittsburgh venues in the coming months.

“Musically, it's really been just like the floodgates opening in terms of new music, because so many artists held off on releasing albums, either because they weren't completely finished with them, or they just didn't want to put them out because they couldn't tour,” says Felix. “So now we're getting all of this stuff that we didn't get in 2020. So it's pretty exciting.”

While national acts are back, Felix says local music may need more time to recover from the professional setbacks dealt by COVID-19.

Despite hosting locally focused shows like the Pittsburgh Music Hour, Felix says she never really got to know the scene as much as she would have liked, since the pandemic shut things down not long after she moved to the city. Even so, she’s impressed with the city’s hip-hop and R&B scene, which she hopes to spotlight more on the station.

“I think one of the cool things about the music scene here is that people do seem to really like to collaborate with each other, and that's something that was missing over the last year,” says Felix. “But I'm excited for that to come back and see what people come up with.”91.3FM WYEP wyep.org