As stay-at-home orders continue, more renters are organizing to demand relief from their landlords 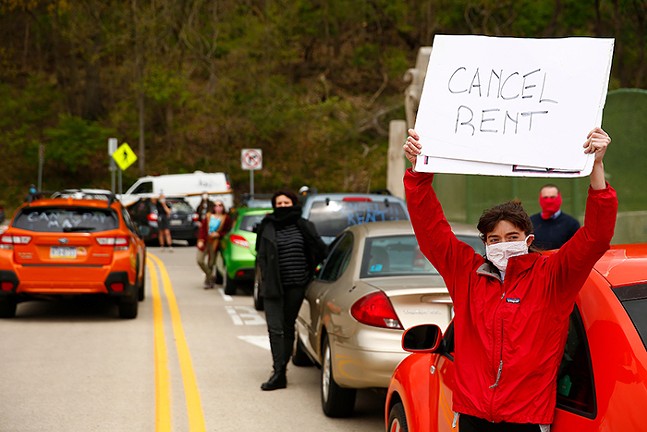 CP photo: Jared Wickherham
Protesters advocating for rent cancellation on May 1
The pandemic quarantine period began in mid-March and has now stretched through two rental payment periods. Most renters pay on the first of the month, but many are now out of work and unable to pay their rent or have to drain their savings to do so. As the situation inevitably stretches through more rental payment days, and as large swaths of Pittsburghers remain unemployed or have reduced wages, renters are trying to figure out the best plan of action.

Leases don't generally include a clause for a life-altering global pandemic and many landlords, especially large rental companies, have not shown interest in compromising with tenants. Now, tenants are beginning to take it upon themselves to organize with other renters, forming councils, and attempting to negotiate with their landlords.

When Trieste Devlin began quarantining at her apartment in Friendship while not making money, she considered the possibility of a rent strike but knew that a group effort would be more powerful than just one household. So she got in contact with the Pittsburgh Union of Regional Renters (PURR), one of the groups emerging in tenant organizing amid the pandemic. PURR put out a petition in March to collect information from renters about their situations and whether they were interested in organizing.

Using contacts provided by PURR, Devlin began reaching out to other tenants of her landlord, JJ Land Company, which owns dozens of apartment rentals across the city, including in Bloomfield, Shadyside, Highland Park, Sharpsburg, and the South Hills.

Devlin, along with other tenants, began distributing flyers, knocking on doors, and circulating an online form to connect about forming a tenants council. On April 30, the JJ Land Tenants Council delivered a demand letter to their landlord outlining their needs and asking for JJ Land to meet for negotiations.

JJ Land has not responded to the letter and did not respond to request for comment on this story.

"Everybody involved is afraid and doesn't think that it's morally correct for them to be asking for full rent from us when we're not making any income, or reduced income," says Devlin. She says that in spite of the current situation and the fear that comes with a precarious financial situation, there is "joy and solidarity" in connecting with other tenants from the same landlord.

"Everyone we've talked to, whether they are currently able to pay or they're in some sliding scale between able and unable, is very worried about the next few months and is concerned for themselves and also their neighbors," says Daniel Unger, another JJ Land Tenants Council member and organizer who lives in East Liberty.

Tenant organizing movements have been spreading across the city, as have calls for legislation to freeze or cancel rent and mortgage payments. On May 1, around 50 people joined an in-car protest in the Hill District to advocate for rent cancellation across the county, city, state, and federal levels. The protesters held signs that said "cancel rent" and "no pay May."

While there is a moratorium on evictions in Allegheny County, it currently only stays in effect through May 11. While it is likely to be extended (as it already has been during the pandemic), there is no guarantee that landlords won't back-charge rent after the pandemic restrictions are lifted. In the past six weeks, over 1.6 million Pennsylvanians have filed for unemployment. While parts of the state are set to begin reopening on May 8, Allegheny County is not one of them.

Devlin says that the main goal of sending the letter and of organizing the tenants council is to ensure safety for her and her fellow JJ Land renters, both during and after the quarantine period.

In the letter addressed to JJ Land, demands include suspending rent for all tenants without requiring back payment, promising to not evict tenants, waiving late fees and maintenance fees, and not reporting lack of rental payment to consumer reporting agencies. Devlin and Unger say that they expect and are ready to negotiate.

For the JJ Land tenants, the idea of paying full rent during a pandemic when so many are out of work feels especially immoral considering many of the tenants live in units that are in disrepair. Unger says that many tenants in the council agree that there are maintenance and repair issues that aren't being addressed, but also weren't addressed before the pandemic. He describes JJ Land's fulfillment of maintenance requests as "generally kind of negligent."

Unger, who has lived in a JJ Land unit for three years, says his unit has persistent electrical problems, old cigarette butts under the carpet in the bedroom, and a heater that has broken down every winter. Devlin says the company ignoring maintenance issues feels "purposeful."

The JJ Land Tenants Council is still figuring what to do after not hearing back from their landlords by their requested date, May 4, which was also the last day tenants could pay rent without incurring a late fee. A rent strike has been discussed but has not been agreed upon yet by the council

"Rent striking is theoretically one of the most powerful things we as a tenants council could do towards the landlords, but it's also the most risk we can do as individuals," says Devlin.