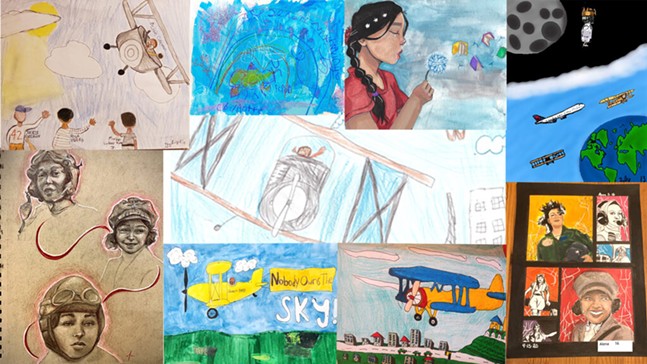 Now PIT is slowly bringing the program back with events like its first-ever student art competition.

On Oct. 26, PIT announced the launch of an exhibit inspired by the children's book Nobody Owns the Sky, a story about Bessie Coleman, the first licensed African-American pilot. The show — the result of a contest that launched in September — includes work by nine students ranging in age from 6-18, all of which will be displayed digitally throughout the terminals.

As part of the program, young artists — who were chosen by aviation educator Teresa Clark and arts and culture manager Rachel Saul Rearick — will also participate in a virtual masterclass with local artist and puppeteer, Cheryl Capezzuti.

In a press release, Rearick says, “The contest wasn’t just about adding new paintings and drawings to additional locations throughout the terminal. We want to encourage children who dream of becoming artists, and we hope that aviation can be an inspiration for them.”

Clark adds that they were a little concerned about moving forward with the contest for various reasons.

“We were a little unsure about what kind of response we would get because this was the first time we were doing this and the pandemic made it a little more complicated,” Clark says. “But the response from schools and families was just tremendous.”

In the past, Art in the Airport has hosted a number of events and art residences that gave passengers a chance to meet local artists like fashion designer and Pittsburgh City Paper columnist, Tereneh Idia.

The student art show comes at a time when PIT has begun to recover from the shock of the pandemic. In a previous article, Rearick revealed that traffic at the airport had dropped significantly around the start of the pandemic, as stay-at-home orders and concerns over being in closed spaces kept people from traveling. Recently, she says the airport begun to “rebound a little bit," with PIT leaders giving the program the go-ahead to reintroduce art back into the building.

Even as the pandemic leaves many things uncertain, Clark says PIT plans to stage similar art contests in the future.