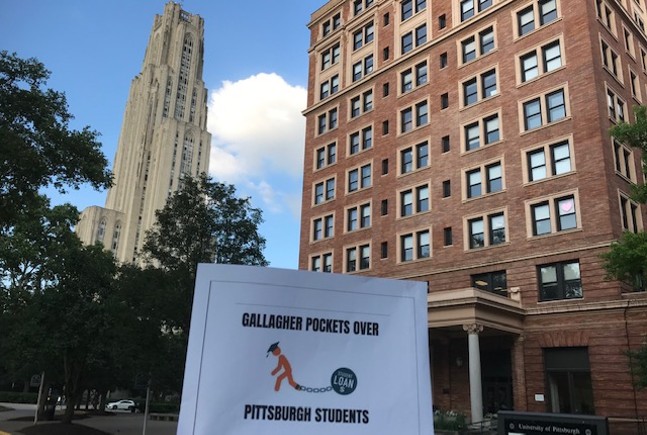 CP photo: Ryan Deto
University of Pittsburgh protest flier on campus
Pennsylvanian students graduate with the highest debt of any students in the nation.

Last week, the Pennsylvania State System of Higher Education decided to freeze tuition at the 24 state-owned universities. These are mostly smaller colleges dotted throughout the state, but they include the nearby California University of Pennsylvania and Slippery Rock University. Tuition for in-state, full-time students will remain at $7,716 a year.

However, students attending some universities in Allegheny County aren’t as lucky. The University of Pittsburgh, Carnegie Mellon University, Point Park University, and Robert Morris University have all announced tuition hikes. Many of them have seen tuition hikes for the last several years.

The University of Pittsburgh is partially funded by the state government. Pitt administrators requested a 6.5 percent increase in state funding for 2020, but only received 2 percent.

But some student groups point out that Pitt chancellor Patrick Gallagher received a raise last year to boost his salary to over $1 million a year, and also received a $500,000 bonus.


*PITT STUDENTS RETWEET*
Print these out and hand them to incoming freshman and parents at pitt tours/pitt starts that are happening around campus this summer! dm me if you don't have a printer/want a PDF Link instead (ik its simple but its something) #Pitt #H2P pic.twitter.com/ZfA1rk7HBn

Pitt’s tuition increase comes in contrast to Temple University, another school that receives some funding from the state. Temple administrators announced last week that it would freeze tuition rates for 2020.

Point Park University’s tuition will increase by 4 percent in 2020, according to student-newspaper The Globe. PPU non-conservatory students will pay $31,180 a year, while those enrolled in the Conservatory of Performing Arts will pay $39,740.

Point Park graduates leave with an average debt of $27,924, which is actually on the lower end of student debt Pennsylvania graduates.

According to CMU’s student newspaper The Tartan, the Oakland university is also raising its tuition rates by 2.9 percent. The editorial board of The Tartan was not pleased with the increase. In a February editorial, the board pointed out how the total estimated cost of attending Carnegie Mellon in 1984 was, adjusted for inflation, equivalent to about $31,000 a year, while current CMU students pay about $72,000 a year.

“The fact remains that the barrier to a dignified existence — the one we were all led to believe relied on good grades, a good school, making the right moves — is much higher for us than it was for previous generations,” wrote the editorial board.

According to the RMU Sentry Media, the student-run media site for Robert Morris University, the Moon Township school will increase tuition rates by 2.9 percent. Students there will pay just under $15,000 per semester in tuition, or about $30,000 a year.

Housing costs at the suburban campus are also expected to increase by 2 percent. Students will pay $3,235 per semester for a double-occupancy room.