As guitarist of the Mavericks, Eddie Perez lives out his rock-god dreams in an unlikely forum | Music | Pittsburgh | Pittsburgh City Paper

As guitarist of the Mavericks, Eddie Perez lives out his rock-god dreams in an unlikely forum

“You wouldn’t think that an influence of Jimmy Page or Angus Young of AC/DC would fit into the Mavericks, but somehow it does.” 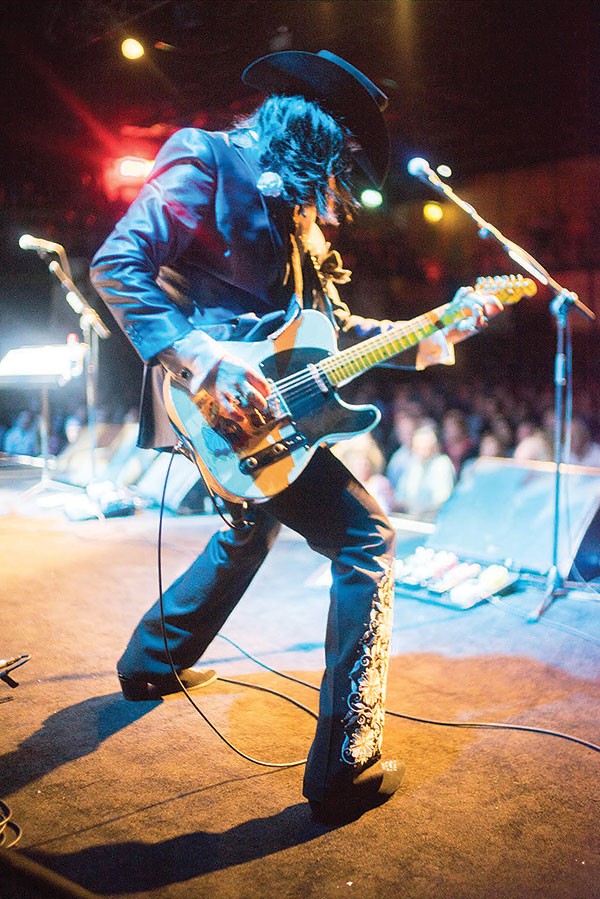 “My heroes were Jimmy Page, Jeff Beck, Van Halen and Ace Frehley,” says Perez, lead guitarist of the Mavericks. “Everything a big-eyed boy would find fascinating about rock ’n’ roll, that was me.
“I was 12 years old and my father took me to see ZZ Top and it blew my mind. I was never the same after that.”

Perez began playing paying gigs at the age of 13, and would hone his guitar skills playing in other bands across Los Angeles. But in 1986, he heard a sound that would change his life.
“That was the first time I heard Dwight Yoakam’s ‘Guitars, Cadillacs’ and it was amazing,” Perez says. “I hadn’t heard anything like that before. It was a modern spin on the classic honky-tonk music of the ’50s and ’60s.

“Hearing that really turned me around and it gave me a focus. From then on I started to learn everything I could about that music. But then I also had that rock ’n’ roll background, too.”

In 2003, Perez replaced Nick Kane as lead guitarist of the Mavericks. The Mavericks —fronted by Raul Malo, possibly one of the most distinctive and powerful vocalists performing today — had begun in the mid-’90s as a traditional country quartet. But by the early 2000s, the group was beginning to incorporate different styles, especially a bit of the Doug Sahm-ish Tex-Mex sound.

The band broke up just two years into Perez’s tenure, but in 2013 reunited with In Time — a record unlike anything it, or any other band, for that matter, has ever produced. They followed it up last year with an even more progressive album entitled Mono. Both records were gloriously genre-defying. Songs ranged from the honky-tonk variety to those driven by tight Latin rhythms and heady ballads. On the most recent record there was even a ska tune.

“The Mavericks have morphed into this band where the parameters in which other bands live just don’t exist for us. We come together to create this thing with no real agenda other than trying to hit that joyous sweet spot within each song,” Perez says. “When we play together, we’re not thinking about any of the labels or restrictions that are placed on musicians. So when you say that the Mavericks have become its own genre, you hit the nail right on the head. It’s Mavericks music; it really is its own thing.”

While the Mavericks do “rock” on stage with their infectious, lively tunes, there really isn’t much that could be defined as ’70s guitar rock. Still, on stage, Perez is every bit the rock god he dreamed of being as an 8-year-old Latino kid from L.A.

During a show last April at the Carnegie Music Hall of Homestead (where The Mavericks will return for two shows on June 17 and 18), Perez owned his side of the stage. Yes, he played soulful, driving guitar licks, but his presence was something to behold. He danced rhythmically with the music, his long, black hair flowing and waving with each note he played. He made grand flourishes as he moved about the stage; his whole body moves with the music. It’s Eddie Perez playing “Dance in the Moonlight,” but at times you swear it’s Jimmy Page playing “Whole Lotta Love,” and it works.

“You wouldn’t think that an influence of Jimmy Page or Angus Young of AC/DC would fit into the Mavericks, but somehow it does,” Perez says of his stage presence. “When I’m on stage, I show up to give a performance because that’s what I would want to see. You dig what I’m saying? I’m not so much thinking it as much as I’m feeling it. I try to get to the most real, honest place that I can within each song.

“What I’m doing on stage is a visual to what that sound feels like to me.”

That sound has been an important part of the band since it reunited three years ago. When it broke up in 2003, the move shocked their fans, but it probably shouldn’t have. The band began to morph into something different musically with Trampoline, but couldn’t complete the transition. Perez performed on one studio album and a live record called Live in Austin. That record is full of lackluster performances. Malo would spend the next eight years putting out amazing solo records. Perez would work with several artists including Malo, but he spent the majority of the time on the road with Dwight Yoakam, the man who turned him on to the new era of honky-tonk. Perez says that bringing the Mavericks back together in 2013 made sense. And throughout his nearly 25-year career, he says, this is the best place for him to be.

“Our success is based on an old-school work ethic and respecting the history of the music that’s come before us,” Perez says. “In doing that, I think we’ve become our own branch off of that tree of American music. I don’t think there’s anyone out there doing what we do, not all of it together anyway. We take all of these sounds, put them in one pot, stir them all up and what comes out, I think, is pretty special.”

Speaking of The Mavericks , Eddie Perez